The DIY UMX A-5 Build

THE ONE WEEK UMX A-5 VIGILANTE BUILD

By Chris Wolfe, The RC Geek

Once in a long while my good Friend Brent (Corsair Nut) gets to spend some time in San Diego.  We’ve been friends since we were kids as his dad used to work for my dad at one point in the shop.  I have memories of him, his brother and I running around the back of the shop just doing what kids do.  We reconnected about 10 or so years ago and pretty much picked up where we left off!  So when he’s in town, there’s always some RC madness going on whether sporadic fly days or projects and it’s great!  We’re always encouraging and pushing each other to go for that next project or running ideas off of each other on builds, etc.  One thing about Brent, he is a master when it comes to working with foam and he’s shown me a lot of the techniques that I’ve been sharing with you.  So, when he mentioned he was coming to town, we talked about teaming up on a quick Ultra Micro (UMX) jet.  The subject? The A-5 Vigilante.

We actually planned this project (including sizing some drawings!) over a year ago on one of his previous trips.  For me, I have always had this airplane in mind for a build as the proportions are perfect for an RC subject.  It has a big wing, big tails and a nice wide fuselage which means good flying characteristics.  For a big bird, landing gear are kind of an issue (they always are!), but for a UMX bird like this, that’s no matter.  Fixed gear chicken legs here we come!

BTW, I have included the templates for the build further down in the article (no instructions), so if you’d like to give building one a shot, do it! 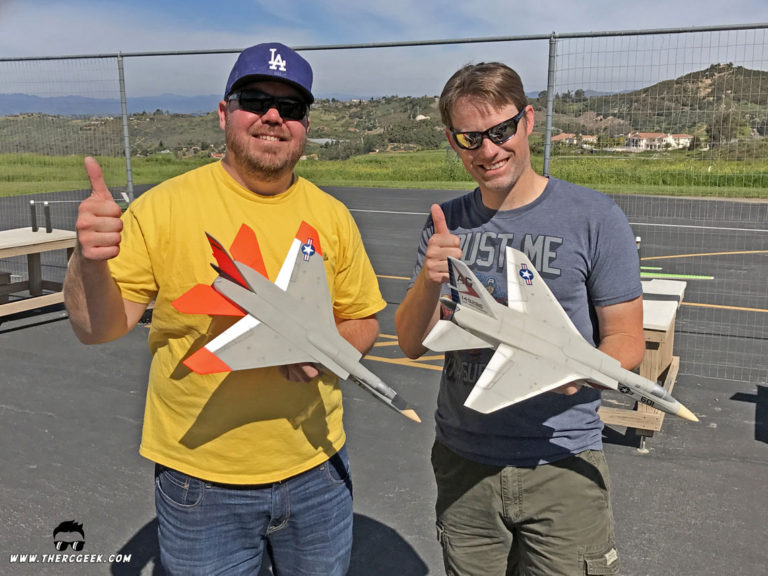 Now, I can’t say I was a huge help in the building process since our schedules really didn’t line up very well for the week he was here. Add to that that I was a hand down based on a broken finger I was 3 weeks into resulting from an ice hockey injury. I was fresh out of a cast but had a removable splint and couldn’t grip anything very well still even without the splint. So the team up ended up as Brent doing all of the building during the day and me providing encouragement in the form of Iron Eagle quotes when appropriate via text (or while watching the movie with him in the shop the night before the maidens). Oh, and I designed and printed the decals, so I guess that’s something… 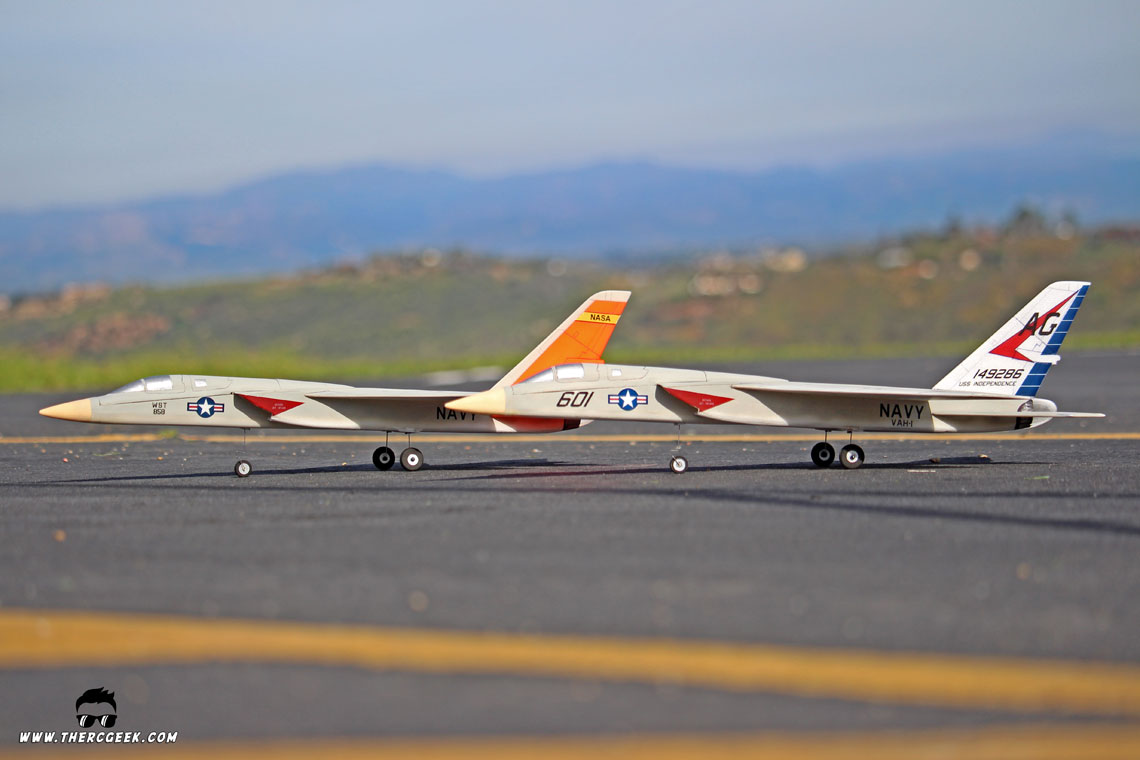 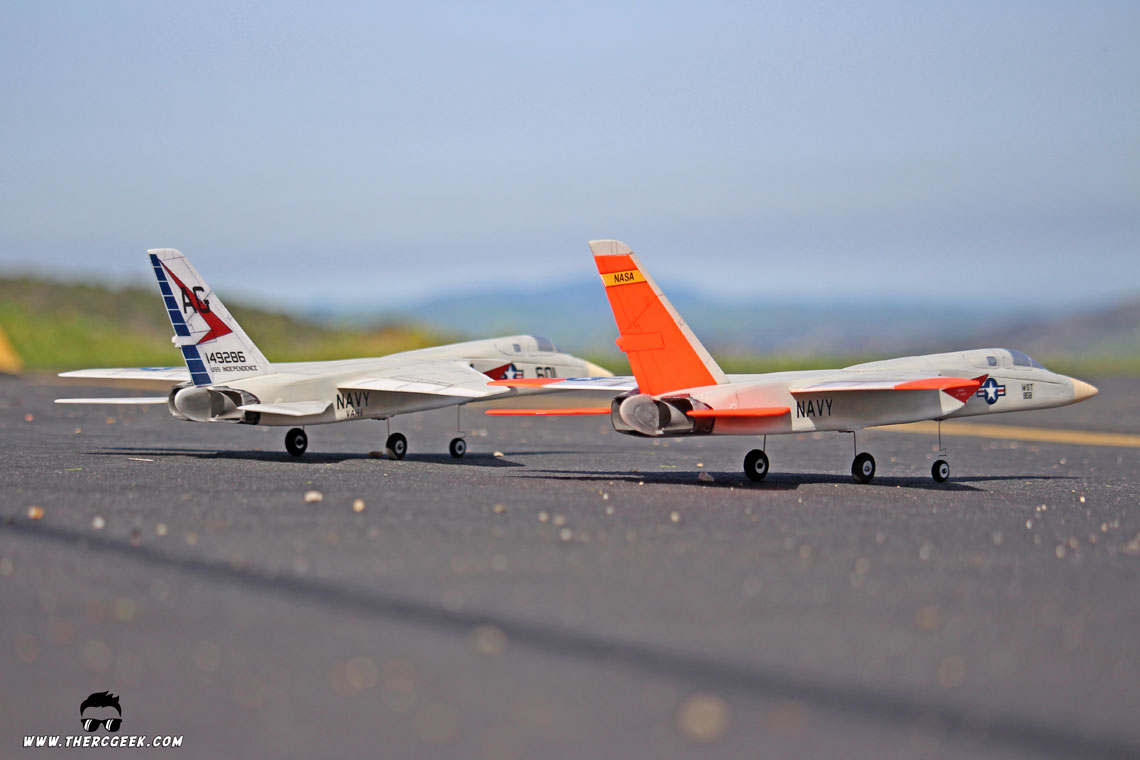 SCRATCHBUILDING A UMX A-5 VIGILANTE

The following few paragraphs give a general overview of the process taken in scratchbuilding these Vigilante’s.  It’s not an instruction set, but just an overview of what was done along with the downloadable templates.  All of this spanned about 5 days time I think.  It was about 2 am the day before our planned maiden flights when we actually finished the airplanes (we of course had to take the obligatory 2am selfie).  We just kept on going not even noticing the time.  We started watching Iron Eagle about 11 that night thinking we wouldn’t even get through the whole thing.  Well, we ended up getting through all of Iron Eagle and about half way through Iron Eagle 2.  One important lesson we did learn, turns out Iron Eagle 2 doesn’t hold up like we remembered it did as kids.  Iron Eagle though, yeah, still the best movie ever!…and based on a true story…   Good times! 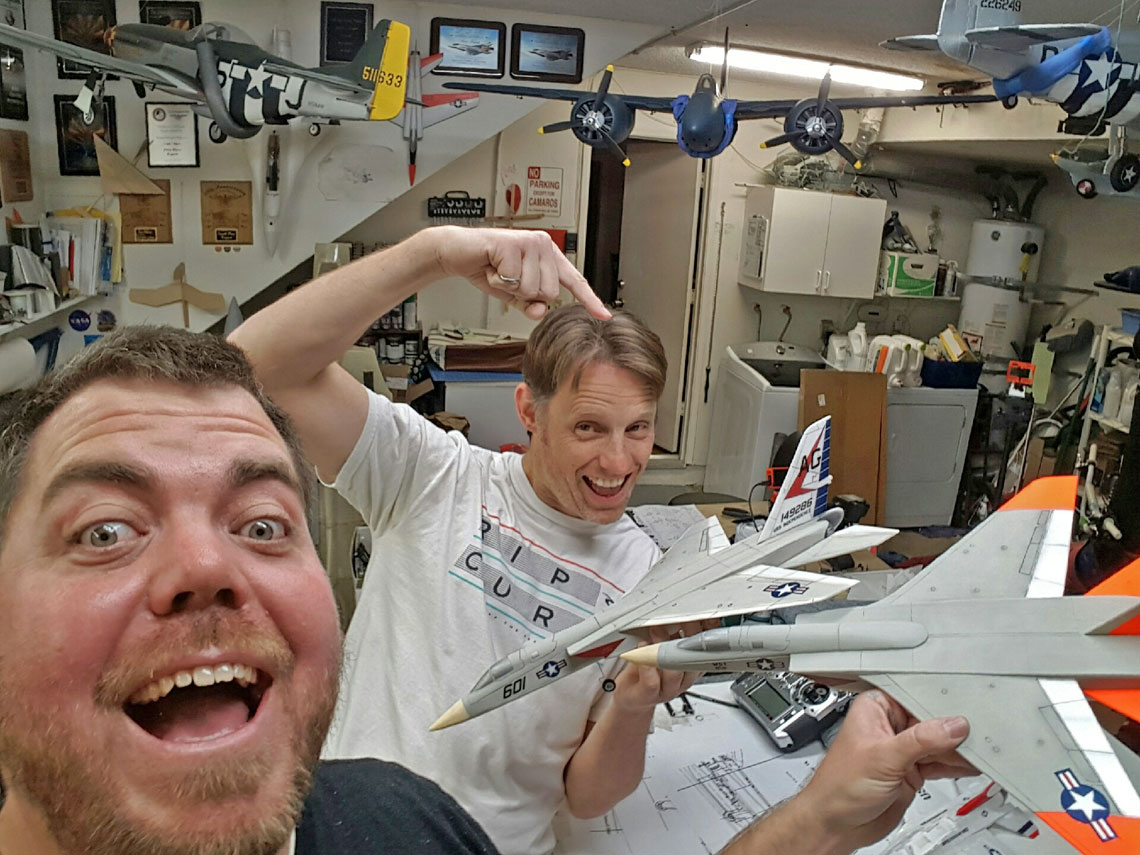 First things first, we needed material and electronics.  For material that meant buying some depron!  I was looking to pick up some 2mm sheets but unfortunately in the process discovered that depron foam is no longer being made.  That meant we were at the mercy of what was left which was some slightly warped 1mm.  To make the 2mm we needed we just laminated 2 sheets of 1mm with some 3M77 spray glue (sprayed very lightly) which in turn also helped flatten out the material.  Brent also brought down some spare 2mm Depron scraps he had too which we also used.  For the electronics, we found some second hand E-Flite UMX F-16s and pulled all of the electronics from it.  Those airplanes are setup with tailerons which is how the Vigi’s would be setup.

In terms of the design philosophy, the Vigi has a pretty boxy fuselage with quite square cross-sections which meant we could simplify the fuselage into essentially a box with rounded corners.  We took a drawing and traced out some templates from it and broke the fuselage into some simplified top, bottom, and side parts.  The canopy area and nose would be shaped out of some basic 2 lb density EPS foam.

DOWNLOAD THE TEMPLATES HERE (Print these on 11×17 with page scaling turned off.  Also, the included drawing is of the RA-5C which has a notable hump along the spine.  We flattened the spine on the templates to make an A-5A from the drawing for simplicity.)

The templates traced out onto drafting mylar, cut out, and then used to cut out the necessary parts from the depron sheets.  In terms of the assembly, the fuselage is a straight box build with some extra 2mm depron in the corners for rigidity and the rounded corners (sanded once the fuselage was together).  Openings are left on the top for the wing and the bottom for the fan and electronics.  The dorsal and stabilizers are a single piece of 2mm depron.  The wing, to keep it easy, can be a flat plate made with a single piece of 2mm depron (with a light carbon spar).  In our case, Brent opted to airfoil the wings and made some ribs from 1mm depron and sparred and shear webbed it with the 2mm. 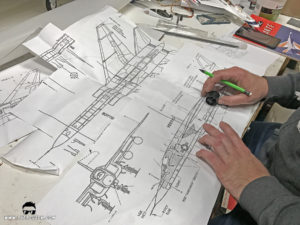 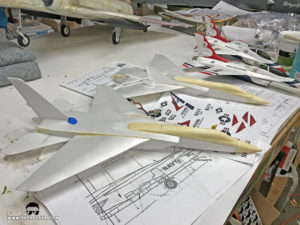 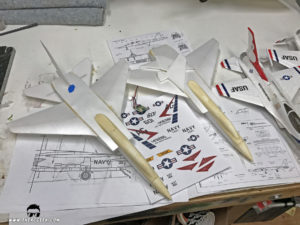 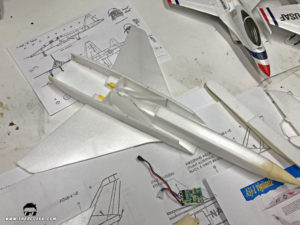 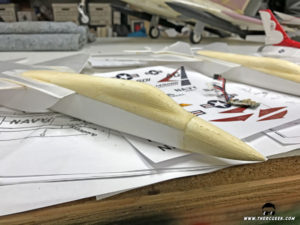 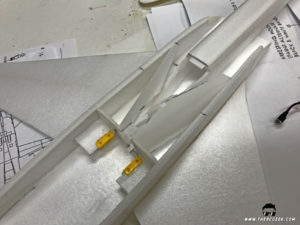 The horizontal tail pivots were made from a small carbon fiber rod and the pivots and actuator arms made from some thin sheet styrene. The fan was mounted using a 2mm depron bulkhead and the “brick” receiver mounted just forward of that. Inlet ramps were made from drafting mylar to adapt the square inlet openings to the single fan in the fuselage which helped really clean up the inlet and the ever so important exhaust duct was made from mylar as well. The taileron servos were mounted on either side of the fan inside the fuselage (internal actuation). Lastly, the canopy and nose tip were made from 2 lb density EPS foam. The shape was blocked out using the templates and then then the contours were carved by hand using a small sanding block. Once shaped and everything was together, some light spackle was applied as needed to clean everything up and then sanded smooth. 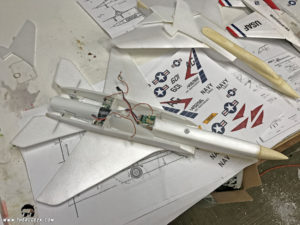 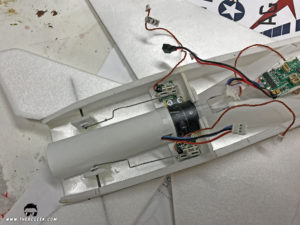 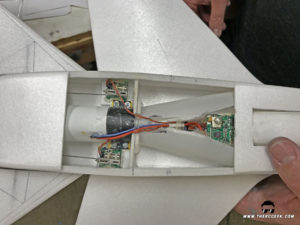 With the construction done, all of the spackled areas were sealed up with a couple light coats of minwax polycrylic and then our UMX Vigi’s were painted with an airbrush. Brent is all about the high vis dayglow orange, so he went with a bright NASA scheme. For myself, I opted for an operational unit from VAH-1. The tail flash came out way better than I expected it to.  Brent even went so far to add some panel lines to the airplanes which also meant, we had to do some airbrush weathering too! 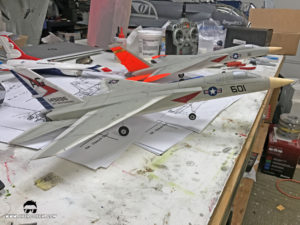 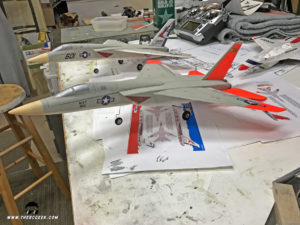 Running on about 4 hours worth of sleep, it was an early adventure out to the Wingmasters RC field for the maiden flights on these new screamers. The sun gently kissed the wildflowers of the field as it rose across the hilly terrain surrounding the runway as we arrived. Not wasting any time, we promptly unpacked and started shooting photos and video of these new creations we had made!  This was my first venture to the field following my hand injury and I was FAR from recuperated. That said, I was pleasantly surprised to be able to hold both my camera and transmitter well enough to operate them (not at the same time of course!). That meant, game on, I was filming and I was flying!

First up was Brent to maiden his blinding dayglow NASA A-5. He taxied the airplane out onto the runway lining it up on the center line. After quick check, he brought the throttle forward and away she flew! The airplane was off the ground in about 50ft and Brent was giggling like a school girl knowing right away that the airplane was a winner. The airplane needed very little trim and performed excellently! We couldn’t believe how well the airplane flew in fact having great speed (faster than the F-16) and good vertical. Also, the glide ratio was far better than expected too. 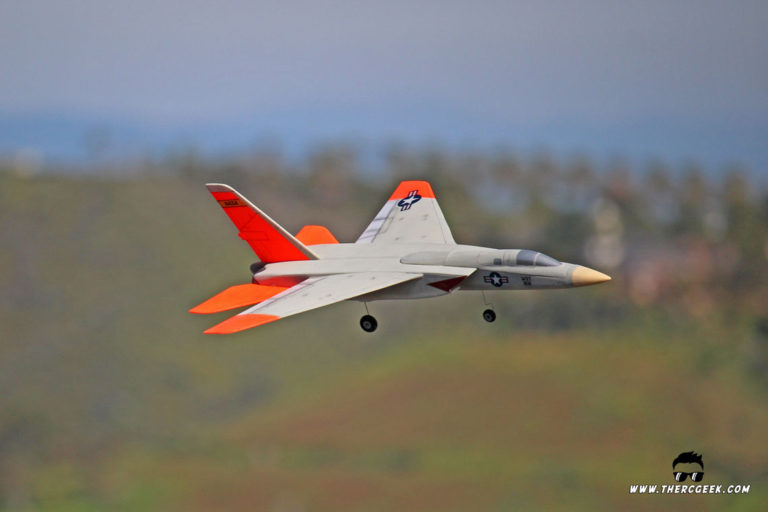 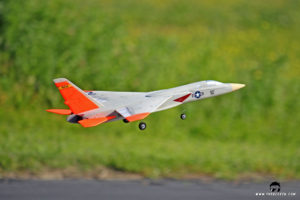 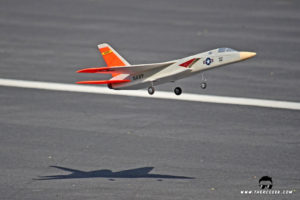 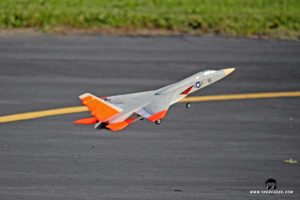 I was up next to hopefully repeat Brent’s success. It was a little different feel on the transmitter for me as I typically pinch the sticks, but was only able to thumb the throttle and steering based on my busted finger. That said, the airplane steered great and lifted off the ground easily! My A-5 was a little more out of rig than his and so required a bit of right trim for level flight. Also, it felt a tad nose heavy too. That said, once it was all trimmed out, the airplane flew awesome! It’s such a great shape in the air and the taileron control provides plenty of authority for aerobatics. The fan is totally a dentist drill, but no matter because it pushes these airplanes wonderfully. 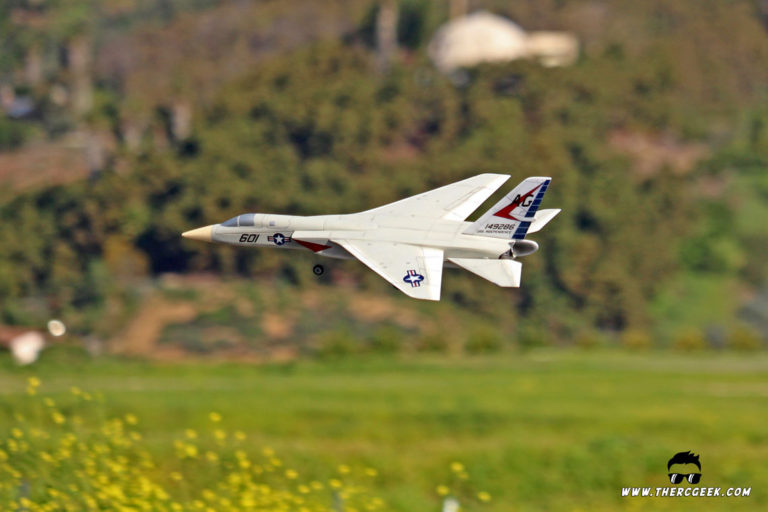 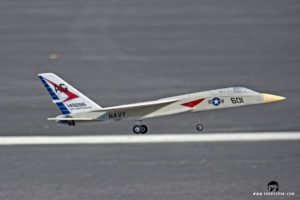 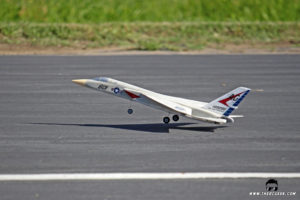 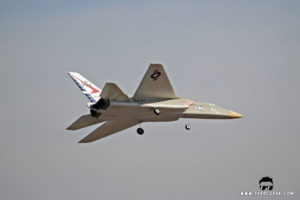 These kind of diversions are what are so great about this hobby. Having a blast with a good friend and building something new and exciting in the process. This project may have in fact inspired a couple much larger versions to be built, but that remains to be seen yet. I have always liked the looks of the Vigilante so it’s great to have such a unique specimen of one in the hangar. Good times and good memories!

For more information about the RC Geek and his projects, visit http://thercgeek.com/