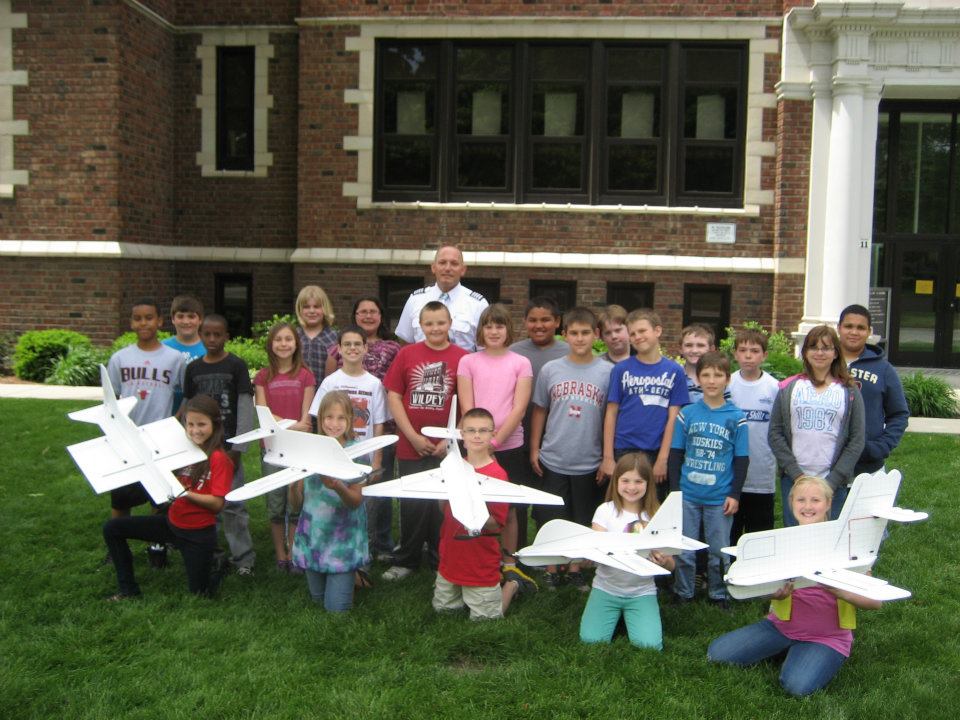 The Foam Aircraft Design Project was developed by Scott Fitzgerald to use model aviation as a tool to inspire creativity and demonstrate the processes by which ideas become reality.  The original project was accomplished with students from Columbus Elementary School, Edwardsville, Illinois.  It was a great success.  After completing the project, the students will have a fundamental understanding of aerodynamics, aircraft design, construction and basic RC power/control systems.  They will also have the hands-on experience of building and flying their original design radio controlled aircraft. You will need the assitance of someone who is familiar with building model aircraft. To locate and contact a chartered AMA club near you for assistance, click here.

Begin by showing photos of a variety of radio controlled foam aircraft.   It is important to give the students an image of what they are working toward.  This will get the creativity going.  Next, teach some fundamental concepts of how airplanes fly.  Teach the basics of lift, drag, thrust, weight, wing area, center of gravity, pitch, roll, yaw and the flight controls associated with the different axes of rotation.  Also, teach the fundamentals of radio control flight.  Include transmitter, receiver, servos, motor, propeller, esc, pushrods and batteries.  If possible, have a simulator available for demonstration.  A list of aircraft design terms is included at the end of this guide.

Give the students a blank piece of paper.  Tell them to use their imagination and design any kind of aircraft they want.  The resulting drawings will likely be out of proportion.  Don't worry about that now.  Just appreciate the creativity before you.  Next, have each student show the class their design and explain what kind of flying machine it is.  Have the class vote on one design for further development. 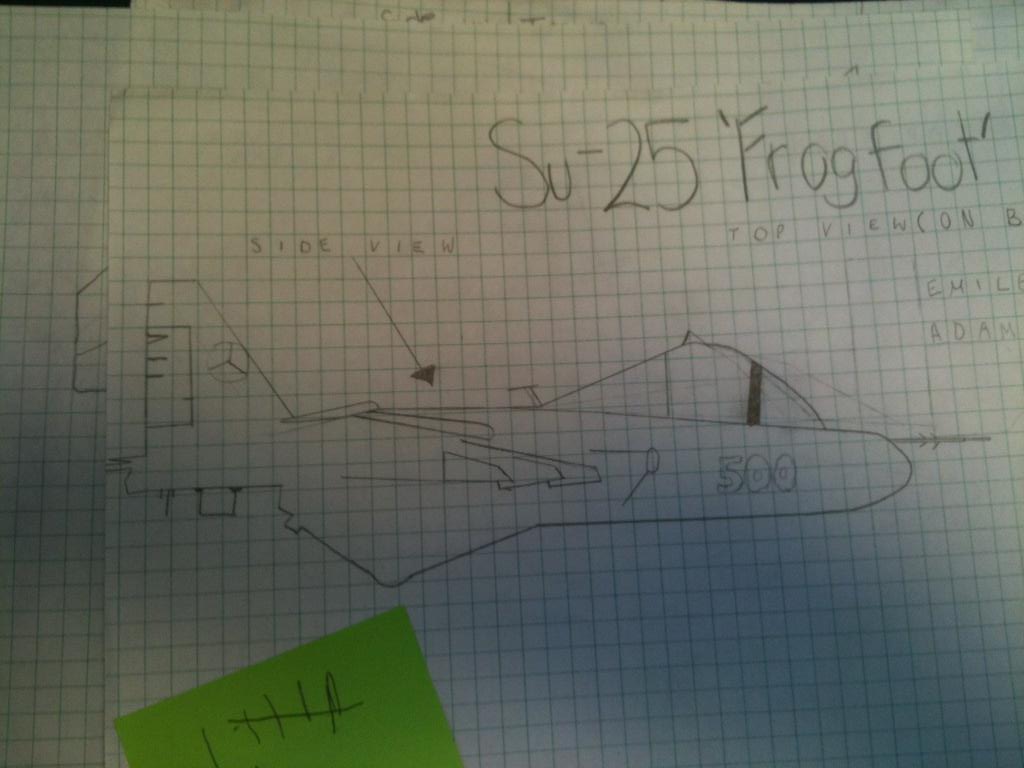 Once a winning design is chosen, it is time to start refining. Without being too critical, point out areas where major design flaws are present.  Common areas to improve include stubby wings, insufficient area on the horizontal or vertical stabilizer and the wing located in a position that is difficult to achieve proper center of gravity.  Try and give the aircraft as much wing area as possible without significantly altering the design.

After the design modifications have been considered, have the students make accurate top and side view drawings of the aircraft on two pieces of graph paper.  Explain the concept of scale and how it relates to the design process.  Include the location of the wing spar and the control surfaces in the drawing. 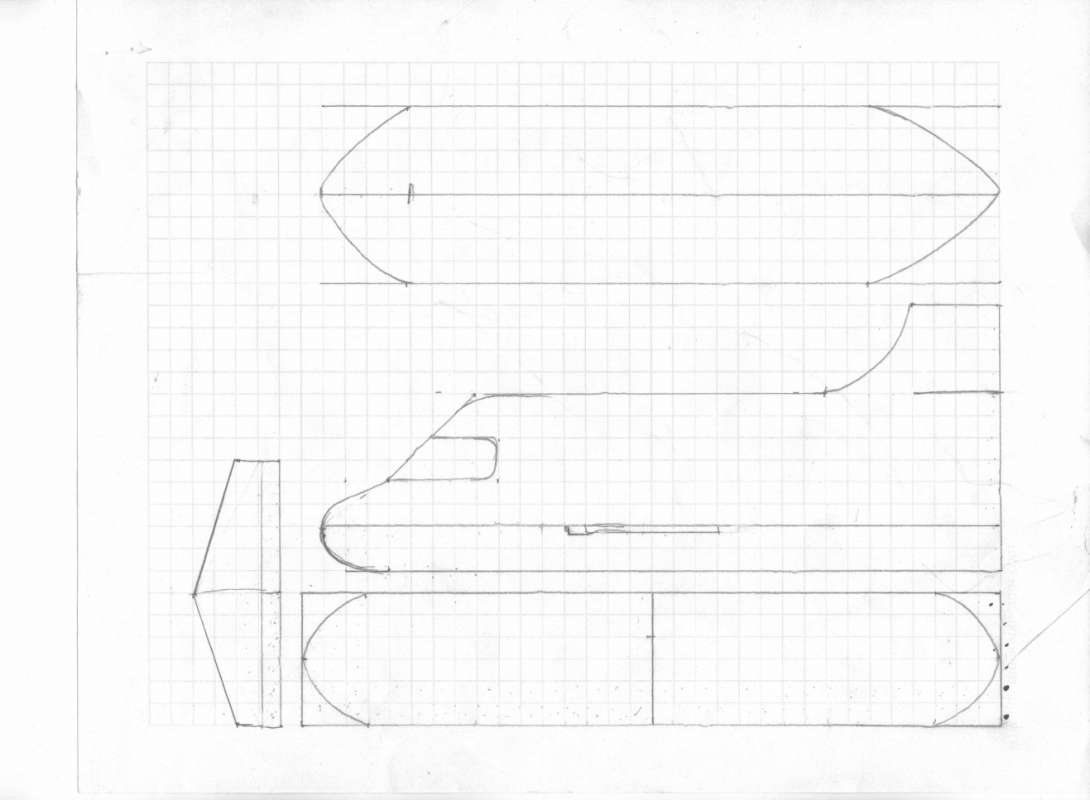 We constructed our models out of 6mm Depron.  The requirement was to build the entire aircraft from one 27x39 inch sheet. Provide graph paper that will allow a one for one relationship to the Depron in inches.  Using the initial drawings as a guide, have the students scale the aircraft components, both top and side view, to a single page of the graph paper that corresponds to the Depron.  You now have a drawing of all the aircraft components that can be directly transferred to the foam.

Draw a set of one inch square grid lines on one side of your Depron sheet.  This is likely the most tedious part of the project. I would recommend having this done before the group meets.  Using the grid lines on the graph paper and the Depron as a guide, transfer your drawings to the foam. If you are working with older students, they may be able to do this part.

Cut and Assemble the Kits

Use an X-Acto knife to cut the parts from the Depron sheet.  You now have a basic kit to start your assembly.  I recommend using low temp hot-glue to assemble your aircraft.  Hot glue is cheap, easy to work with, dries fast and remains pliable.  Assemble the airplanes on a flat surface.  Any warp or twist will adversely affect the flight performance.  The Depron is very flexible until assembled.  The structure gets its strength from the way the components are assembled 90 degrees to each other.  Be sure to include a wing spar into the design. When complete, the structure will be rigid and ready for flight.

I will be non-specific about assembling the airframe.  The order in which the assembly takes place is highly dependent on each individual design.  Further below are images of the aircraft designed by our class. Our "Jet" and "Tetris" designs were based on the wing/top view planform.   All vertical component parts were joined to the planform.  Our "Shark", "Metro" and "Beluga" we're based on the fuselage profile.  All component parts were joined to the profile. The wing and horizontal tail were added after the fuselage was built.

Assemble the airframe and install the 1/8 inch lite ply motor mount.  Apply gussets between the motor mount and fuselage if required for more strength.  Creative use of wooden coffee stir sticks can make the airframe structure more rigid.   Cut a slot in the Depron and insert the stir stick.  Secure with hot glue.  Bevel and hinge the control surfaces with clear packing tape.  You should now have a completed airframe that is ready for motor and electronics.

Temporarily plug the servos into your receiver and power up your radio.  Position the control horns onto the servos and install the control linkage.  Verify the direction and throw of the control surfaces.

Install the motor onto the firewall.  Position the battery to attain the correct center of gravity.  Secure the battery with Velcro straps.  Our aircraft had quite a bit of lifting area in front of the wing due to the wide fuselage design as seen from the top.  As a result, our center of gravity needed to be quite a bit forward to make the aircraft stable.  Plan on using 15% MAC as a starting point if you have a similar layout.  Secure the speed control and receiver to the airframe with Velcro.  Use servo extension leads to route your servo wires to your receiver in an orderly way.  Secure the wires with hot glue.  Install the propeller.  Your airframe is now complete.

Re-check that the center of gravity, control surface direction and throw are all correct before you attempt to fly.  When you are satisfied all is in order, you are ready for the maiden flight.

Explain the flight characteristics of stable and unstable aircraft.  Have the students watch for these as the aircraft takes flight.  I recommend recording the initial flights on video.  We had some carnage on our test flights.  It was fun to replay the footage and analyze what might have been wrong.  Make adjustments to center of gravity, trim and control throws to make the aircraft fly reliably.  We added a small key fob camera to the aircraft to get some on-board video footage.  This was a huge hit!

Your project is now complete.  Congratulate your group on a huge accomplishment!

Pitch - Aircraft movement nose up and nose down.

Yaw - Aircraft movement nose side to side.

Fuselage - The body of the aircraft.

Rudder - The control surface on the vertical stabilizer that controls yaw.

Elevator - The control surface on the horizontal stabilizer that controls pitch.

Aileron - The control surface on the wing that controls roll.

Wing Span - The distance of the wing from tip to tip.

Wing Chord - The distance on the wing from the leading edge to the trailing edge.

Wing Area - The total area of the wing expressed in square inches and square feet.

Wing Loading - The total weight of the aircraft divided by the wing area. Wing loading is used as a tool to help compare and predict the flight characteristics of different aircraft. It is expressed in ounces per square foot.

Mean Aerodynamic Chord - The average chord of an aircraft wing.  For swept wings, it is calculated to include geometry over the entire lifting surface.

Center of Gravity - The balance point of the aircraft.  The point where all the forces on the aircraft act through.

Wing Spar - A structural part of the wing that runs along the span.  It provides strength to the wing.

Scale - A relative dimension of the aircraft.  As scale increases, the aircraft gets larger while the relative proportion stays the same.

RC Transmitter - The electronic unit used to send a signal to control the aircraft remotely.

RC Receiver - The electronic unit on board the aircraft that receives the control signal and sends instruction to the servo/speed controller.

Servo - The remote actuator that moves the control surface.

Speed Control - The electronic unit used to control and power the motor.

Brushless Motor - The device that turns electricity into rotational motion.

Propeller - The device attached to the motor that turns rotational energy from the motor into linear thrust. The thrust is the force that pulls the aircraft through the air.

Example Aircraft Created for the Project 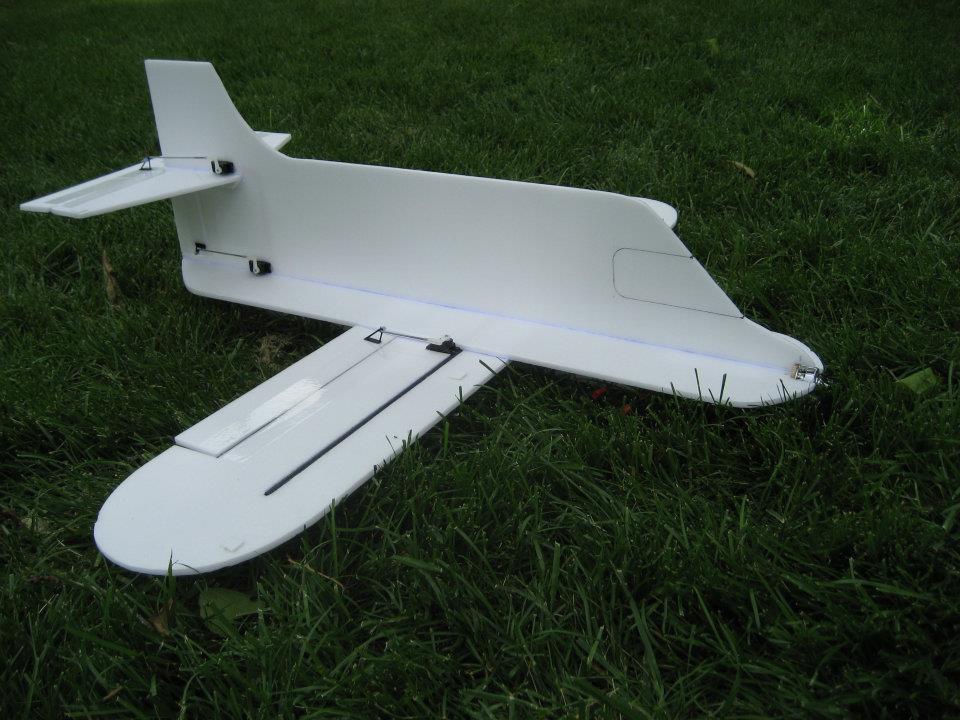 The Metro (above) is a low wing airplane that takes design cues from small, transport category commercial aircraft.  It is an excellent flying model with no adverse flight characteristics.  The Metro flies smoothly upright and given some space, is capable of mild aerobatics.  Handling qualities are improved with a small amount of elevator to flap mix.  Flights in a schoolyard or on a baseball diamond are no problem for an intermediate level RC Pilot.  The Metro was the most straightforward design in our project. 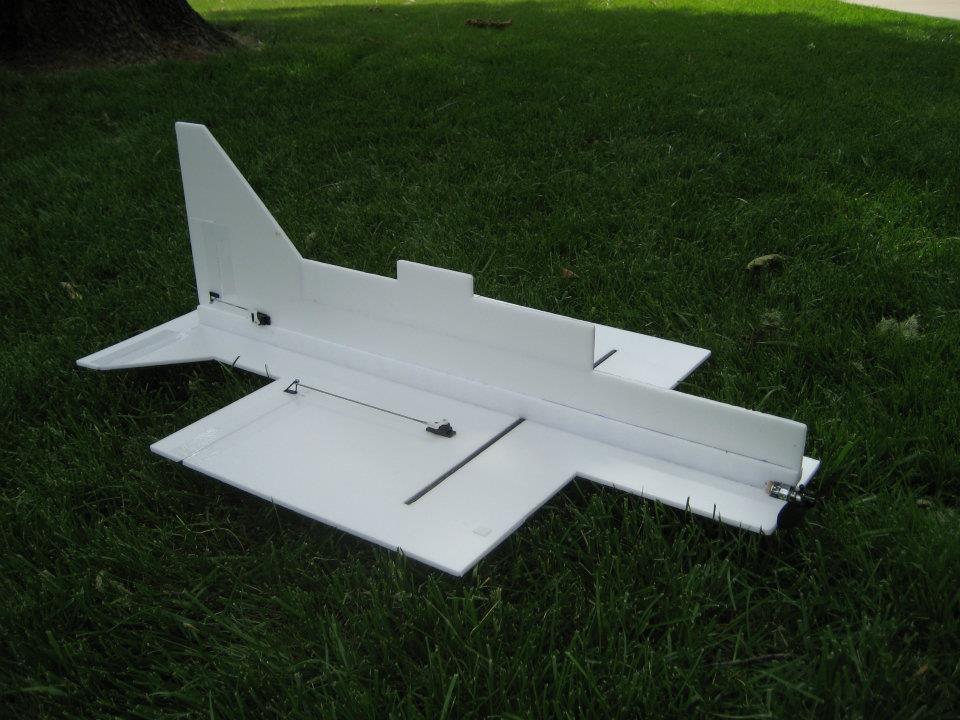 The Tetris is a low wing airplane that is unique in its design.  It is an excellent flying model.  The short span and wide chord make the Tetris a little “loose” on the roll axis.  The Tetris can be turned very tight and is capable of most aerobatics.  A small amount of elevator to flap mix enhances turn performance.  Flights in a schoolyard or on a baseball diamond are no problem for an intermediate level RC Pilot. 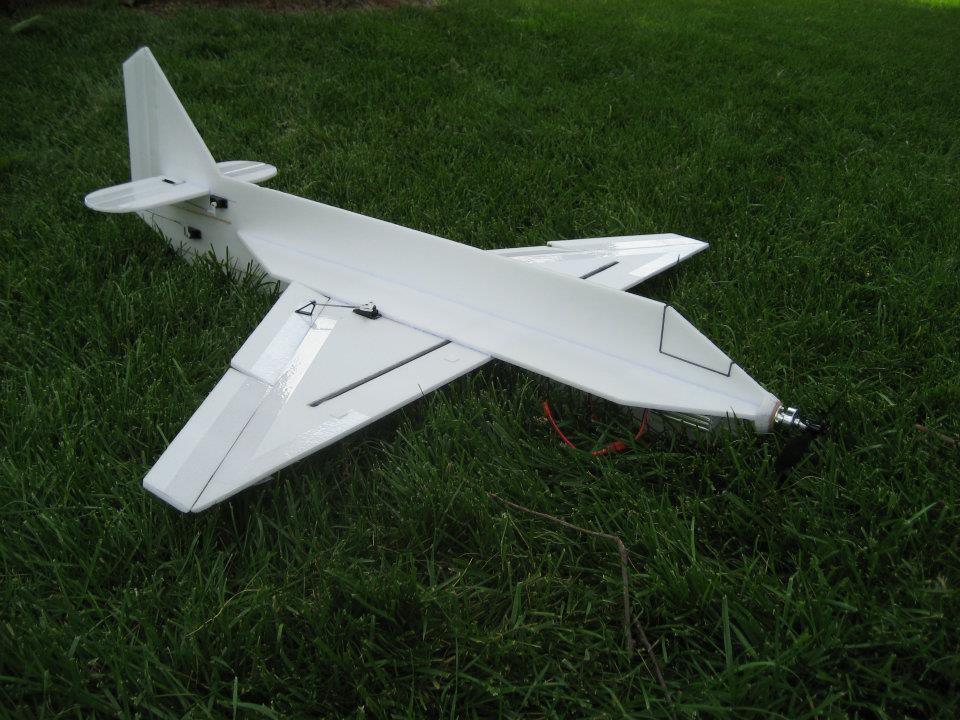 The Shark is a low wing airplane with a radical trailing edge sweep.  The front bears resemblance to the Bell X-1. It is an excellent flying model with no adverse flight characteristics.  The shark is capable of tight turns and excels in higher speed aerobatics.  Flights in a schoolyard or on a baseball diamond are no problem for an intermediate level RC Pilot.  The Shark had the most radical wing design in our project.  On-board video footage highlighted the sharp angle of the nose and captured the action of the ailerons as the aircraft was put through its paces. 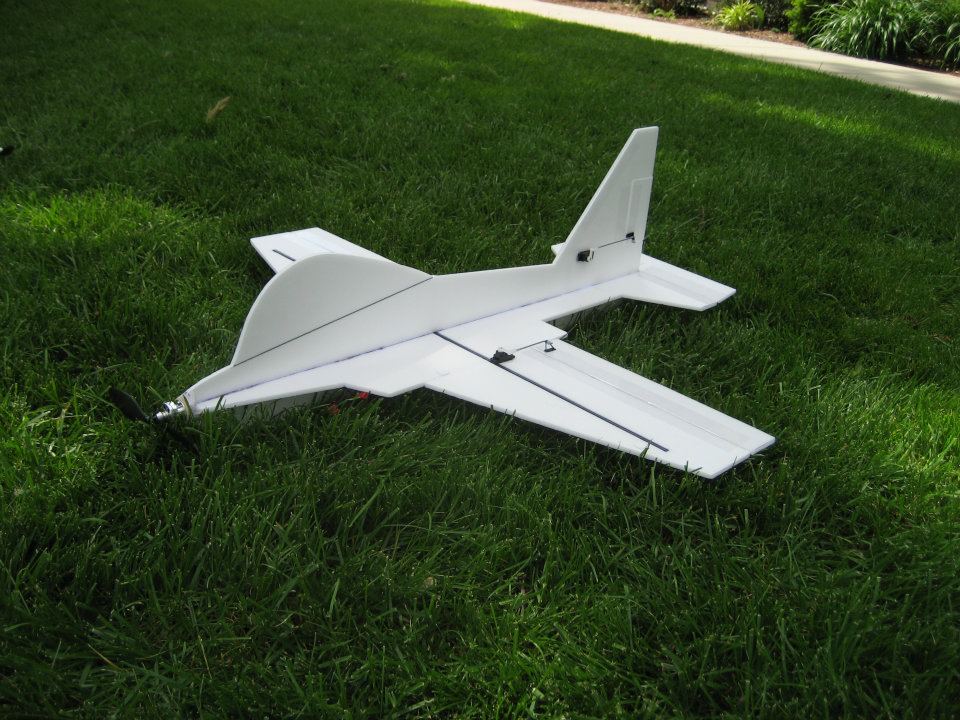 The Jet is the most elegant of all the designs.  It has smooth lines and a larger wing span.  The Jet climbs well and rolls very axially.  It was a favorite at the playground flyoff.  After climbing to a high altitude, the Jet would dive straight down while rolling.  This footage from the onboard camera was used in local TV news coverage.  The only weakness in the design is the delicate nose section.  It is prone to damage when landing.  A small amount of elevator to flap mix helps turn performance.  The Jet can be flown in a playground or on a baseball diamond by an intermediate level RC Pilot. 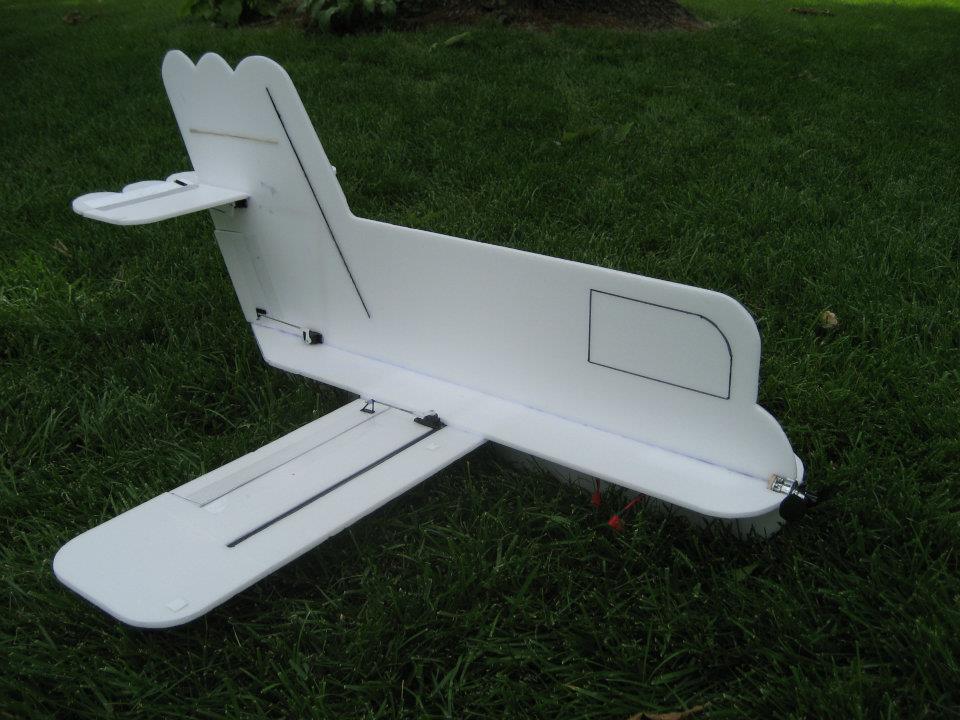 The Beluga is a cartoon-like aircraft with massive side area.  It has some bad aerodynamic qualities that are caused by this feature.  The Beluga must be kept in upright, coordinated flight.  Sideslip angle will cause the horizontal tail to become ineffective.  The result will be a pitch up, uncommanded yaw and departure from controlled flight.  The Beluga can successfully be flown in a playground or on a baseball diamond by an intermediate level RC Pilot as long as coordinated flight is maintained. The Beluga was the most challenging aircraft to fly in our group of designs.