How to Build the Curtiss CW-24B

I often search for something unique to build. One unusual-looking airplane is Curtiss-Wright XP-55 Ascender. I contemplated building a scale model of the XP-55, but then I saw pictures of the Curtiss Wright CW-24B. It is similar to the XP-55 but has fixed landing gear.

The CW-24B appealed to me, so I began searching for three-view drawings and other information for this airplane. I contacted modeler and aircraft designer Nick Ziroli who searched his collection of aircraft material and found three-views for the CW-24B.

In 1940, the U.S. Army held a design competition for a pusher-type fighter aircraft. The Curtiss-Wright Corporation submitted a canard named the XP-55 Ascender. Before committing to build the XP-55, the company created a full-scale test model, the CW-24B. It had a fabric-covered steel frame fuselage and a wooden wing, but the design needed many modifications.

In 1942, the U.S. Army ordered three XP-55s. They were built and tested, but after evaluating the aircraft’s performance, the Army did not see any advantage to the conventional designs, so the XP-55 never went into production.

The author’s completed Curtiss CW-24B is based on the U.S. Army’s full-scale test model. Only one full-scale CW-24B was built.

I drew the plans for the CW-24B, keeping the scale outline. I chose a symmetrical airfoil and gave the wingtips 5° of washout (I am not sure if the full-scale aircraft had any washout).

I calculated the location of the center of gravity (CG), but I must have been incorrect because on takeoff, the model leapt into the air and made a perfect loop—landing on all three wheels and bending the wire legs. I moved the motor battery forward to change the CG.

The model took off perfectly on the second attempt. I had positive control on all of the control surfaces. I was surprised by how much authority the tiny elevator had. The landing was perfect. I learned from those first few flights that CG location is critical.

Glue the bottom trailing edge (TE) sheeting to all of the ribs, and the 1/4 x 1/4 balsa spar to ribs W10 to W13. Glue on the top TE sheeting. Glue the sub-leading edge (LE) sheet to all the ribs and sand its edge so it follows the ribs’ contour.

Pull the extension wires for the aileron and the rudder servos. Flip the wing onto its back and sand the sub-LE on an angle so it follows the contour of the ribs. Apply adhesive to the LE sheeting, but be careful to not alter the washout.

Build the other half of the wing in the same manner then glue the two wing halves together. Smear adhesive onto the plywood brackets and slide them behind the main spars between ribs F2. Pin the dihedral shims under the W12 ribs. Apply adhesive to the W1 ribs and pin them to each other. 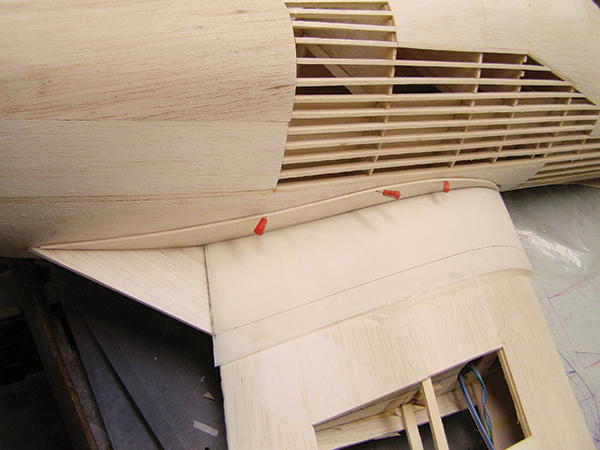 The wing fillet is under construction.

Cut out all of the formers, fuselage sides, and doublers. The outline of the fuselage is indicated with small triangular denotes.

Most of the formers are composed of three or four sections: the center, sides, top, and bottom. Mark the location of the formers on the inside of the fuselage sides. With a strong thread, attach the 5/32 brass tubing to former F6 as shown on the drawing. Place formers F1 on top of F2 and drill holes for the 1/4-inch magnets and the 1/8-inch dowels. Do the same for formers F23 and F24.

The photo of the model before it is covered shows the location of the stringers and the sheeting. When the top and sides are complete, flip the fuselage upside down and glue the bottom quarters of the formers F3 to F12 in place. Again, glue the balsa stringers to the formers that have notches on them. Glue the 1/8-inch plywood plate to the bottom of the F6 former to support the nose landing gear.

Glue the triangular base to the fuselage and to the plywood base between the wing’s TE and the fuselage.

Using 1/16-inch balsa sheet, bond the top fairing sheets to the base and to the support piece on the side of the fuselage. Remove the wing from the fuselage. Cut out the top and bottom fuselage fins. Cut slots in the sheeting, insert the fins, and glue them to the fuselage. 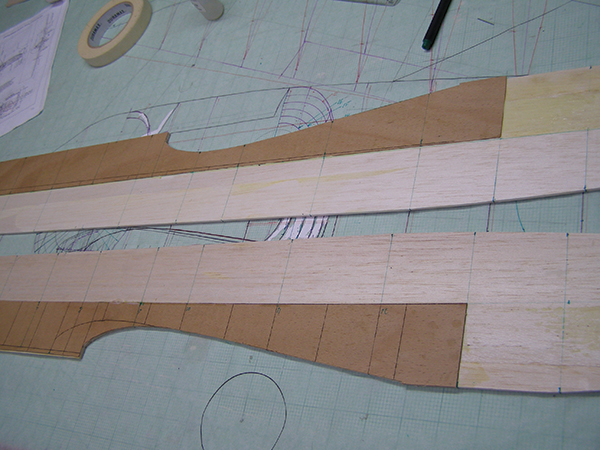 The 1/32-inch plywood doublers are glued to the fuselage sides. 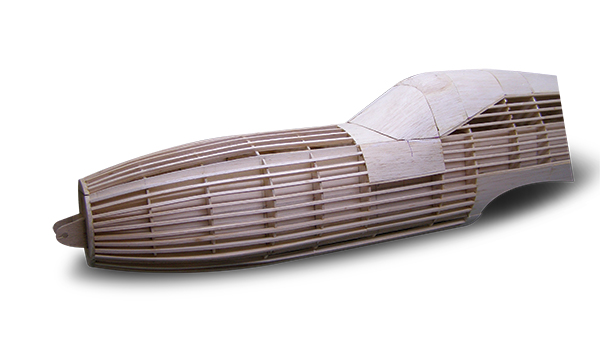 The fuselage sheeting and the stringers are glued to the formers.

Here you can see the planking on the bottom of the rear section of the fuselage.

Cut a 1/4-inch outside diameter carbon-fiber tube to 91/4 inches long. Cut out the shape of the canard surfaces from 3/4-inch balsa sheet. On the hinge line, cut each canard into two sections: front and rear. Make the channel in both of them accept the 1/4-inch inside diameter aluminium or 4-inch-long brass tubes.

Slide the brass tubes onto the carbon-fiber tube so that the ends are flush. Pin the rear section of the canards to the building board. Temporarily insert the tubes into the grooves to ensure that they align. If satisfied, remove them and apply epoxy to the outside tubes. The canard surfaces must be able to be removed from the carbon-fiber tube.

Use epoxy to attach the front section of the canard to the rear one and to the carbon-fiber tubes. Drill a 1/16-inch hole through the middle of the tubes in the location shown on the plans. Sand each canard surface to the symmetrical airfoil.

Make the canard control arm using 1/32-inch steel sheeting. Drill a 1/4-inch and a 1/16-inch hole in the arm as shown on the plans. Solder it to the 1/4-inch wheel collar. Cut two brackets from 1/8-inch five-ply plywood to secure the canard to the fuselage.

Cut the nose cone from the balsa block and glue former F1 to it. Sand the nose block to follow the contour of the fuselage. Inside the nose block, make a cavity for the canard’s control arm to rotate.

Glue the two magnets to formers F1 and F2, and the 1/8-inch guide dowels to former F1. Cut the slots in F1 so that the nose block can slide over the carbon-fiber tube.

Each wing fin and the rudder are made from two halves: left and right. Cut out the shapes from 1/16-inch balsa sheet. Use 1/4 x 3/16-inch balsa to make the four hinge spars, sanding them so that they taper from the middle to the tip. Glue these spars to the TE of the fins and to the LE of the rudders.

Glue the tapered ribs to the side sheets, and the plywood plate inside the rudder to support the control horn. Secure the left side to the right side of the fin. Do the same for the rudders. Sand the fins and rudders then glue the fins to the wing.

Bend the piano wire to shape as shown on the plans. The nose gear slides into the brass tubing that is attached to former F6 with the thread. Install the steering arm to the nose gear. Use an Allen screw so it is easier to affix the arm. Install the main gear to check the alignment. When satisfied, remove the landing gear and make and add the wheel pants. 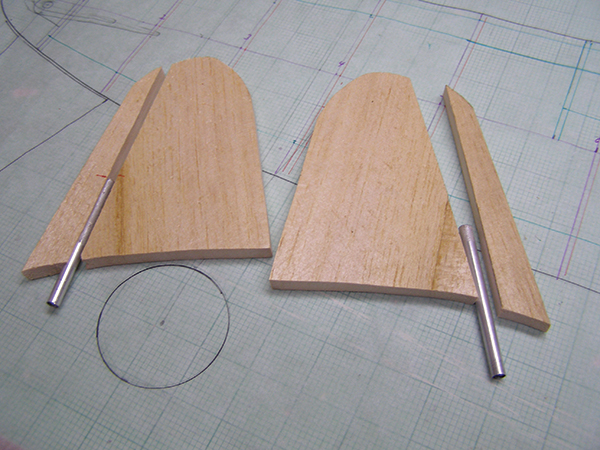 The elevator surfaces are being constructed. 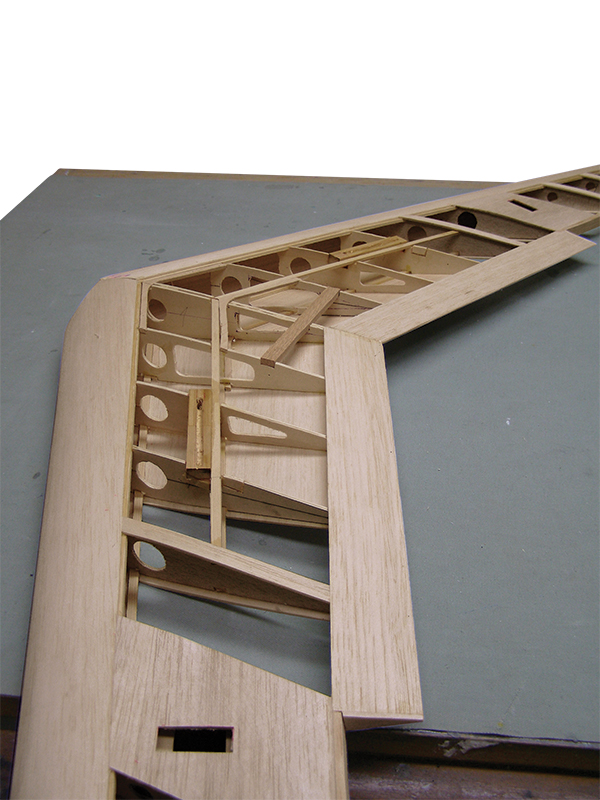 After completing the filling and sanding, cover the model with your favorite material. The full-scale airplane was yellow with red and white horizontal stripes and one blue vertical stripe on the rudders. The front of the cockpit had a black, antiglare, triangular stripe all the way to the nose.

Check the CG by flipping the model upside down and balancing it so that the CG is at the location shown on the plans. If needed, reposition the battery for proper balance.

The takeoffs are no different than on most conventional-shape models. In the air, the Curtiss CW-24B is stable in all axes. During your first flight, gain some altitude and explore the flight characteristics.

When you land the aircraft, let it sink on its own. Don’t try to slow it by raising the nose too high. The model often lands on all three wheels. A short flight video is available on YouTube (see the “Sources” list). 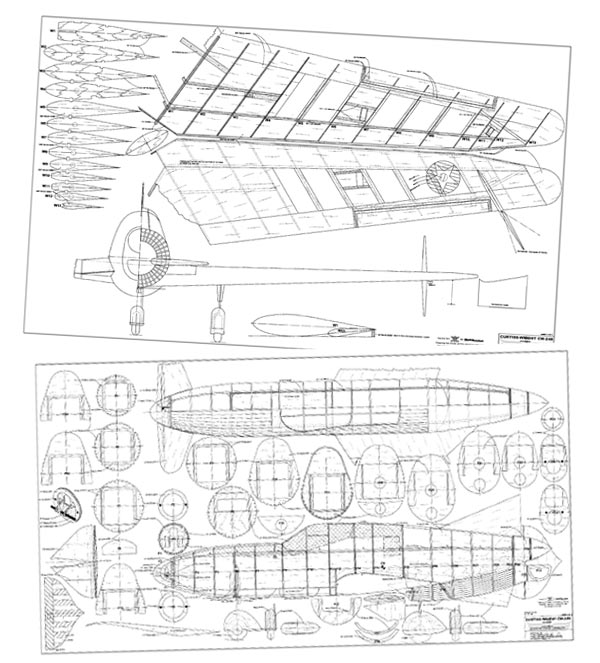 I AM AN AMA MEMBER

I LIVE OUTSIDE THE US

I AM NOT A MEMBER