How an Educator Used Physics to Teach Model Aviation 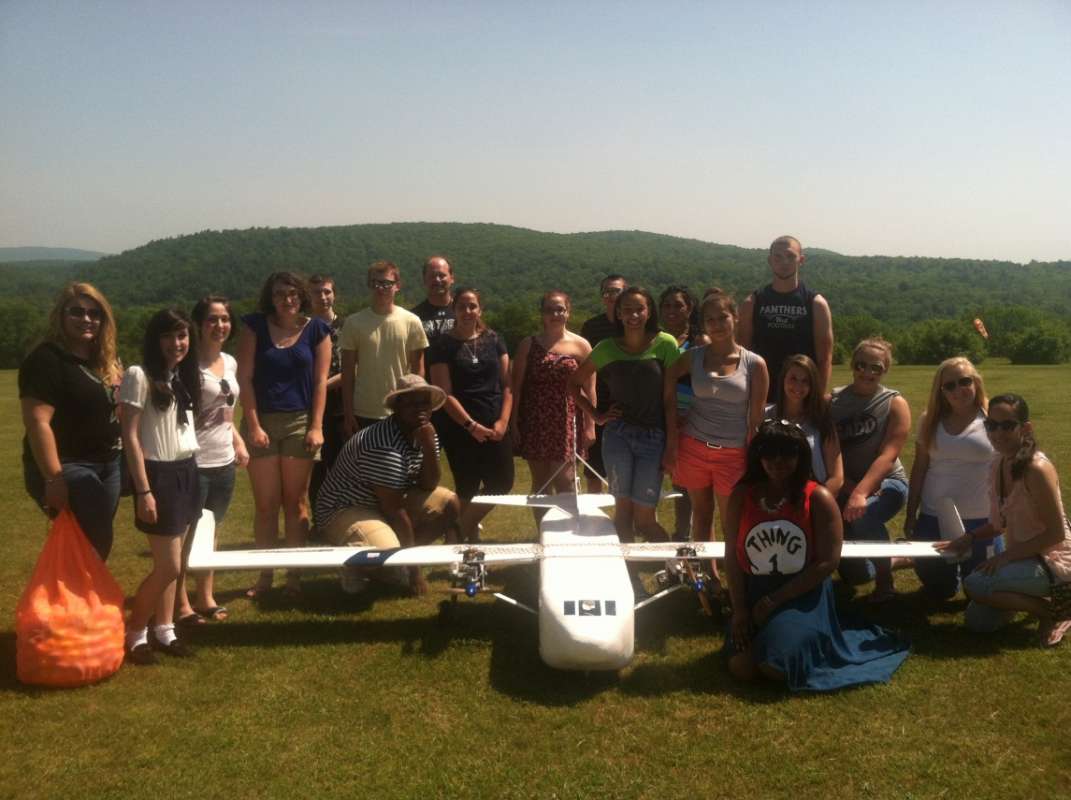 I have been an avid model builder for over 25 years. Throughout my formal education, I routinely turned to my interest in model aircraft as a way to strengthen my problem solving skills. I know that by designing and operating planes, it always assisted in my effort to make scientific concepts tangible and meaningful to me. I currently serve as the president of West End Wings (#1370) in Effort, PA and fly a great deal of model aircraft. Though the hobby in its own right has been very satisfying, I have found no greater reward than to incorporate radio-controlled models into my physics teaching.

As a secondary-level physics teacher, I have worked for 9 years at Pocono Mountain West High School located in Pocono Summit, PA. I have taught students of all abilities about fundamental physics with a concentration in mechanics. My goal has been to prepare them for college physics. For many of them, physics has been very abstract and quite difficult especially when they did not have pre-requisite manufacturing and/or engineering skills. Over the years, I have been able to compile a series of aviation-based activities that helped motivate students beyond what was attainable with traditional book-work. In particular, I would like to share the results of my most recent and ambitious of class projects.

During the spring semester of 2013, my 2nd period Honors Physics class was eager to tackle an advanced project. We contemplated a variety of possible missions for a radio-controlled cargo aircraft. Since the timing of the project coincided with the Easter season, the class chose to carry and drop as many plastic Easter eggs as possible. A plane called The Zeggler was designed and constructed from scratch by a class of 23 so that it would be able to drop 400 plastic eggs at once. The actual weight of the cargo was only 4.0 pounds, but the volume of the cargo would prove to be massive: over 4.0 ft³.

We began by organizing the students into a small aeronautical business where each student had a job and assigned areas of responsibility. I was the lead scientist/owner. Some students were general contractors, while others provided detailed sizing calculations or aeronautical research as engineers. There were also student business managers who kept detailed records of man-hours and receipts. Students really had to work together and communicate effectively.

Every Friday during the 9-week project, we began with a status report from each major group.  Since the class did not have prior experience in these areas, I would guide them to a decision point and then let them make the decision. What was very important to establish was that they had be the ones to make the decisions and to do as much work as possible. I would only do work which I considered to be dangerous or that which required off-site tools; I really tried not to take over the project. We established a functional apprenticeship, where I had to trust them to perform the job which they promised to deliver. I was amazed at how quickly they attained foam cutting and covering skills. One example of their effort was their insistence on bay doors which could open and retract; I recommended just jettisoning the doors. They, however, designed a system and implemented it with a sail-winch servo provided by one of the students. I let them proceed with the enthusiastic concept, and it ultimately worked out fine. 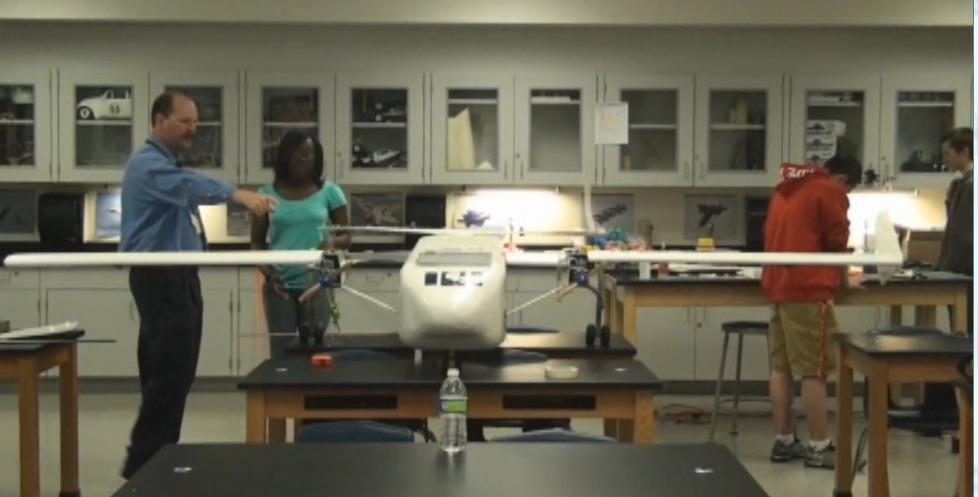 The 22 lb., 11ft-span Zeggler was made predominantly from ¼” foam board, ¼” aspen plywood and EPS foam covered in Towerkote. We chose very available materials from the big box stores in as much as was possible. The bulk of airplane accessories were ordered from Tower Hobbies.

Due to transport considerations, the plane had to break down into manageable sections. A 1” aluminum box and steel tubing were utilized as the main wing spar system, and the landing gear was formed from gray schedule 40 electrical conduit. ¼-20 bolts and blind nuts were used in key assembly locations. 8 standard Futaba S3003 servos were used throughout, and the students made their own custom wiring harnesses using Hi-tech wire and EMS plugs. A 6.0 V 3000 mah NiMh pack powered the R2006GS 2.4 GHz receiver. Initially, twin .46 engines were tried, but a taxi test revealed the need for more power, so twin Thunder Tiger .65 glow engines were substituted. This provided approximately 4.0 HP and 20 lbs. of static thrust. 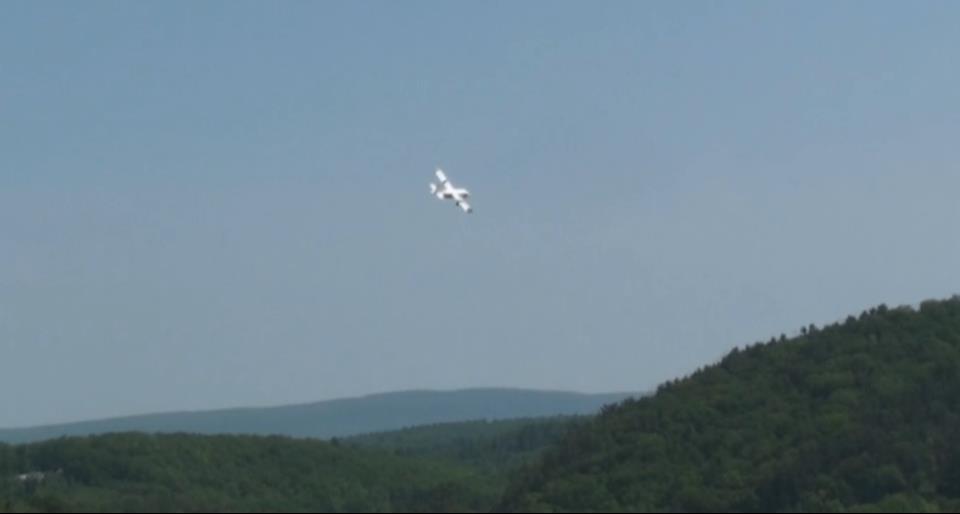 On May 15th, I flew the aircraft at our 28-acre field, and it proved to be remarkably stable, but it seemed to really eat up airspace. I sent pictures of the flight to the school administration and explained that it would pose an unnecessary risk to fly on campus, so it was agreed to take my class on a special field trip (to an actual fieldJ). Weather made the next two weeks agonizing as I waited for the perfect day to arrive, which was not until May 30th.

On the day of the field trip, it was 90° with high humidity, but the winds were very light. I had prepped the plane the previous evening and arranged for several of my club members to help out. Without their overwhelming care and assistance, the project would have been unlikely to succeed. As the club hosted our trip, my class got to interact with club members and watch them fly while we were getting ready for the egg drop. The local newspaper made a hurried attempt to cover our endeavor as well. Several proud parents came to see what their kids had built. 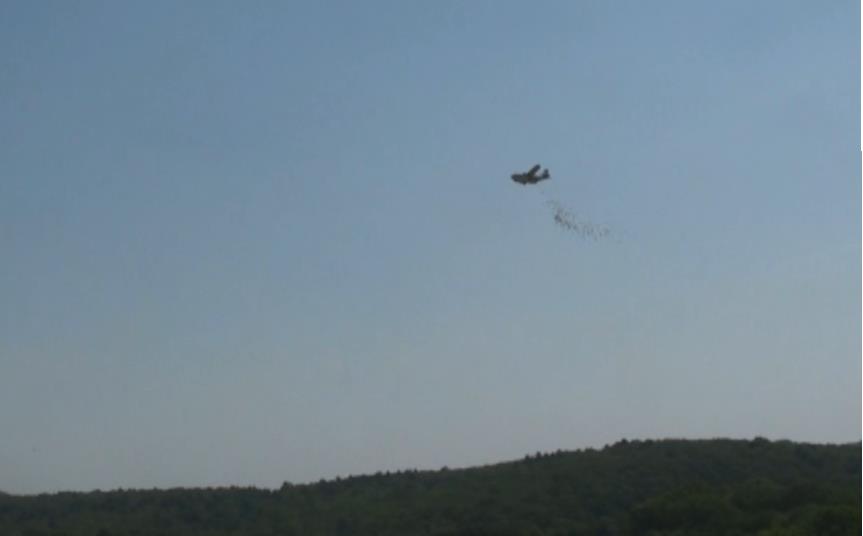 The swarm of 400+ eggs was released with a unanimous cheer from all who were present; my class got to see their project and hard work come to fruition in a most memorable way. Of the dozens of things that could have gone all wrong, they all went right. A second flight was made for the newspaper reporter, and on June 2nd, we made the last flight with onboard cameras. 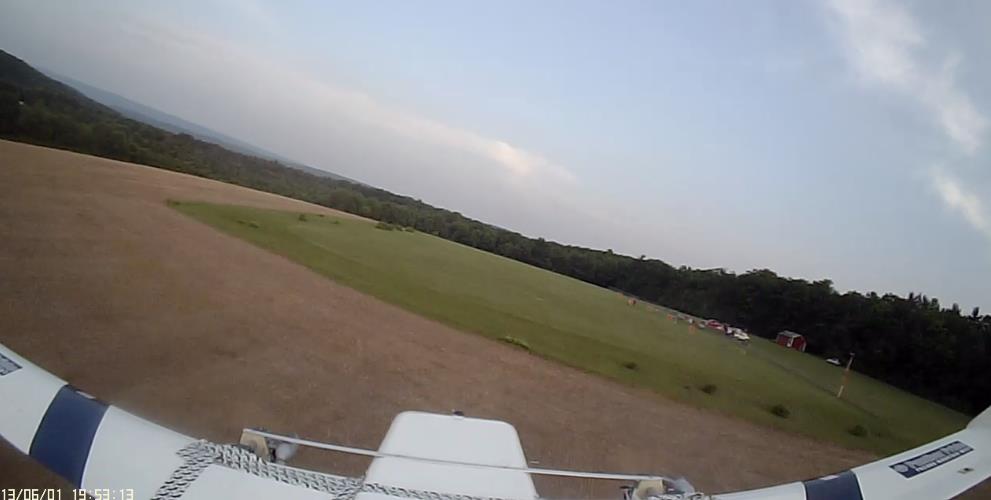 The Zeggler has since had all R/C components removed and has been readied for permanent display at our school; the building principal, Mr. Tom Barbush, wants it to hang from the ceiling in the main hall to celebrate the class’s achievement. We have compiled videos of all the flying and building processes.

I know that many students will choose careers apart from science, and that relatively few will pursue careers in aviation. However, I am confident that each of my students will look back on this experience with fond memories and will acknowledge that it helped them to become better problem solvers. They have shown that they can think critically about any situation and arrive at the best conclusion. The real point to this whole project has been to provide students with a complex, high-stakes endeavor instead of dozens of traditional smaller lab activities. Because success was not perceived as automatic, students worked with purpose and an understanding of what would happen if their part of the project failed; the whole team would suffer. As the project grew in scope, the students were cognizant of the time, money, and extreme effort put forth collectively to make it all happen as planned. The project has made physics and engineering very real to all of us.

I would like to sincerely thank all of my colleagues who so graciously helped throughout the project and helped with the organization of the field trip. I would also like to congratulate my club members for representing West End Wings and the AMA in the most positive form of educational outreach et al. 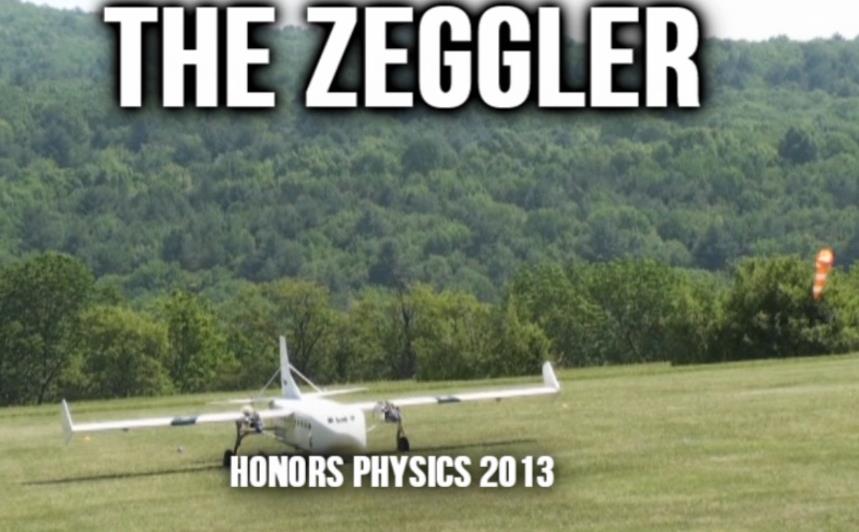 For you educators out there getting ideas, here are some helpful tips: