Check out his website for a lot of great science activities! 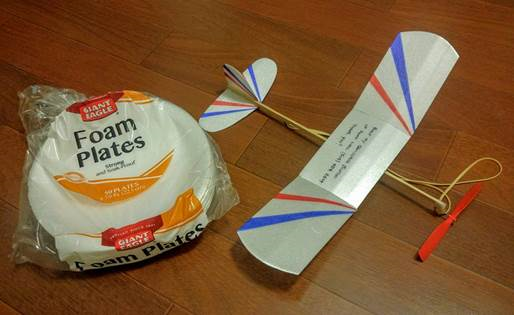 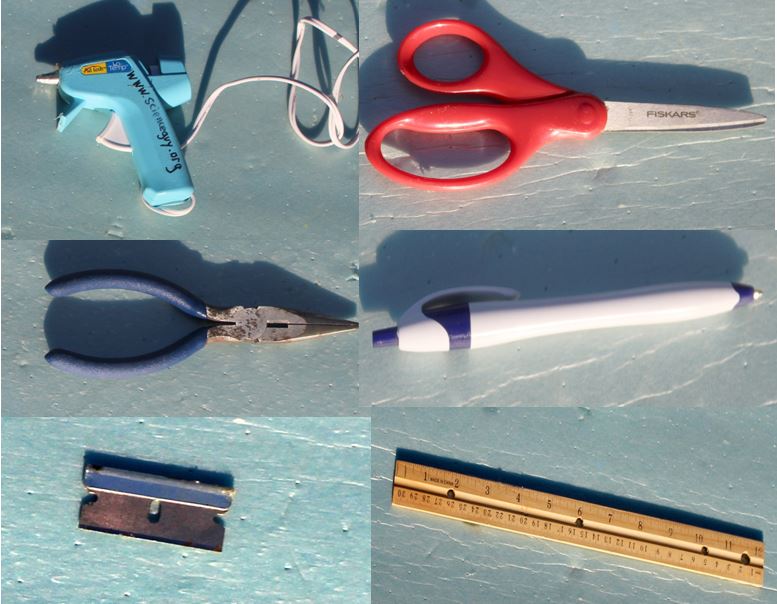 For fast assembly I use low temp hot melt glue guns. Foam plates can be cut with a scissor. To bend the rear hook a needle nose pliers is needed. Parts are traced with an ink pen. To cut the balsa for the fuselage a razor blade or modeling knife can be used. A stiff ruler such as this wood ruler is used to bend the wing crease and for measuring.

Balsa strips can be cut with knife or razor blade but it is also possible to purchase 1/8″ x 3/8″ x 36″ balsa strips.  Using a balsa stripper makes cutting the strips an easy task. 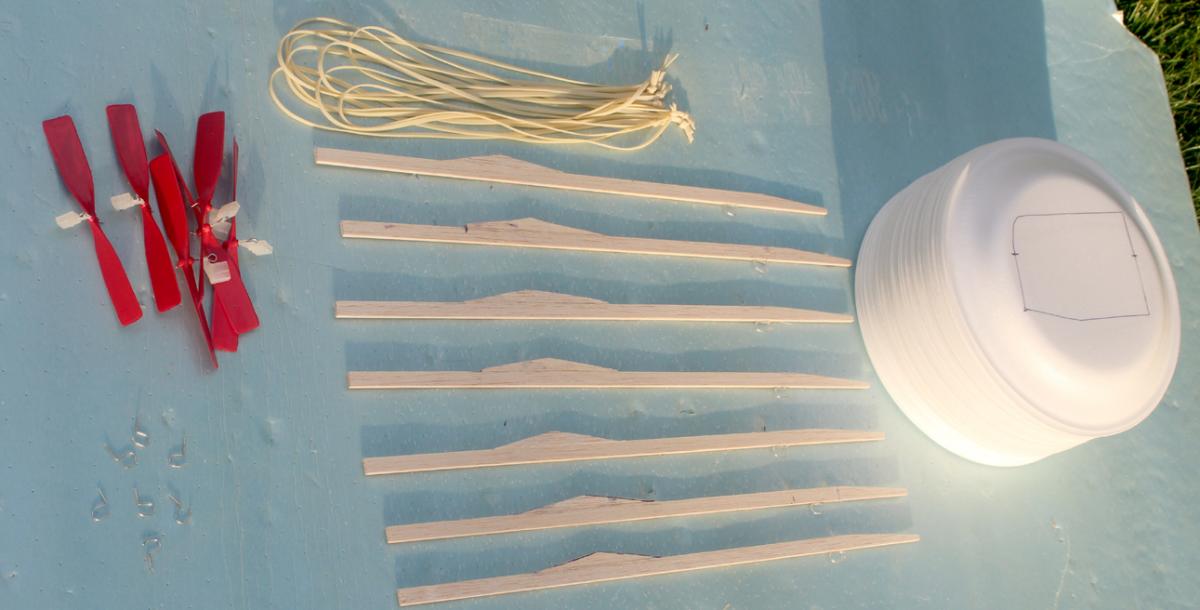 For a recent class, I pre-made the fuselages, traced patterns on the foam plates, and installed the rear hooks on the balsa fuselages. Now the students did not need to bend the wire or cut balsa with a sharp blade. The only tools needed were a scissors, ruler, and hot glue gun.  I cut and tied the rubber strip because students have trouble tying knots.

I will start here in case you wish to build the fuselage for a group ahead of time like I did. The 3/8″ x 1/8″ x 36″ sticks are cut to 16″ long. This will give enough for two fuselages, leftover material can be used for cutting the wing pylon mount.

With the larger section leftover hold that section perpendicular to flat surface and bend the top part up about half way back up 90 degrees. 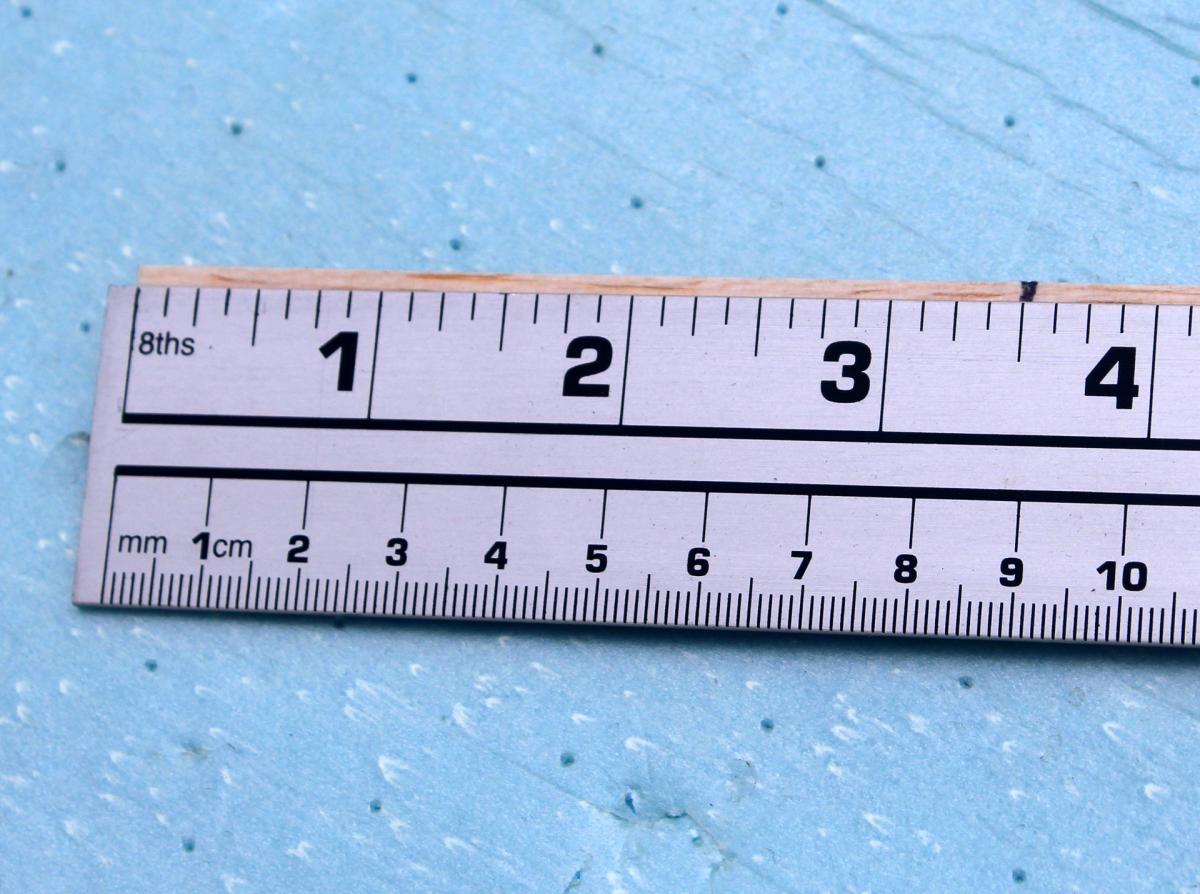 Mark from the left side of the balsa 3 1/2″ for the position of the front of the wing pylon mount.

Draw the angle on the rear of the fuselage, starting at the right end mark on the top 2 1/2″ to the left. From the bottom at the right side of the balsa mark up 1/8″. Then draw a slanted line between those two points. 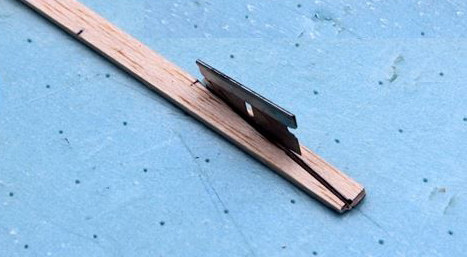 Now if you have not cut the 16″ length yet, make that cut and then the angle cut. 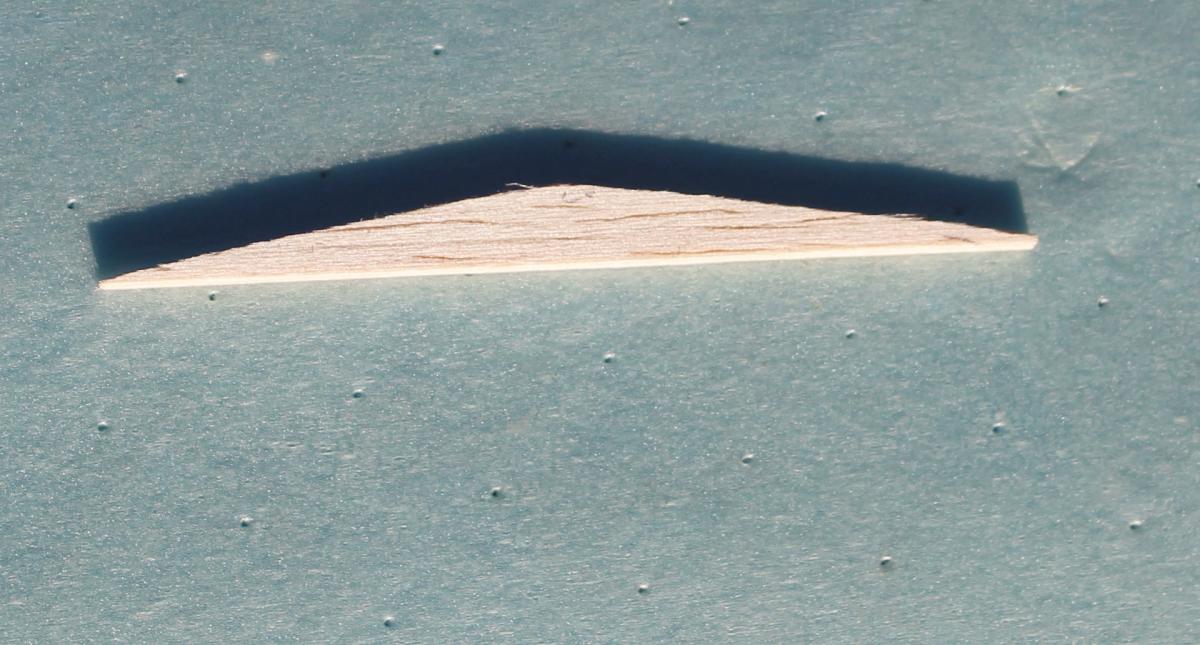 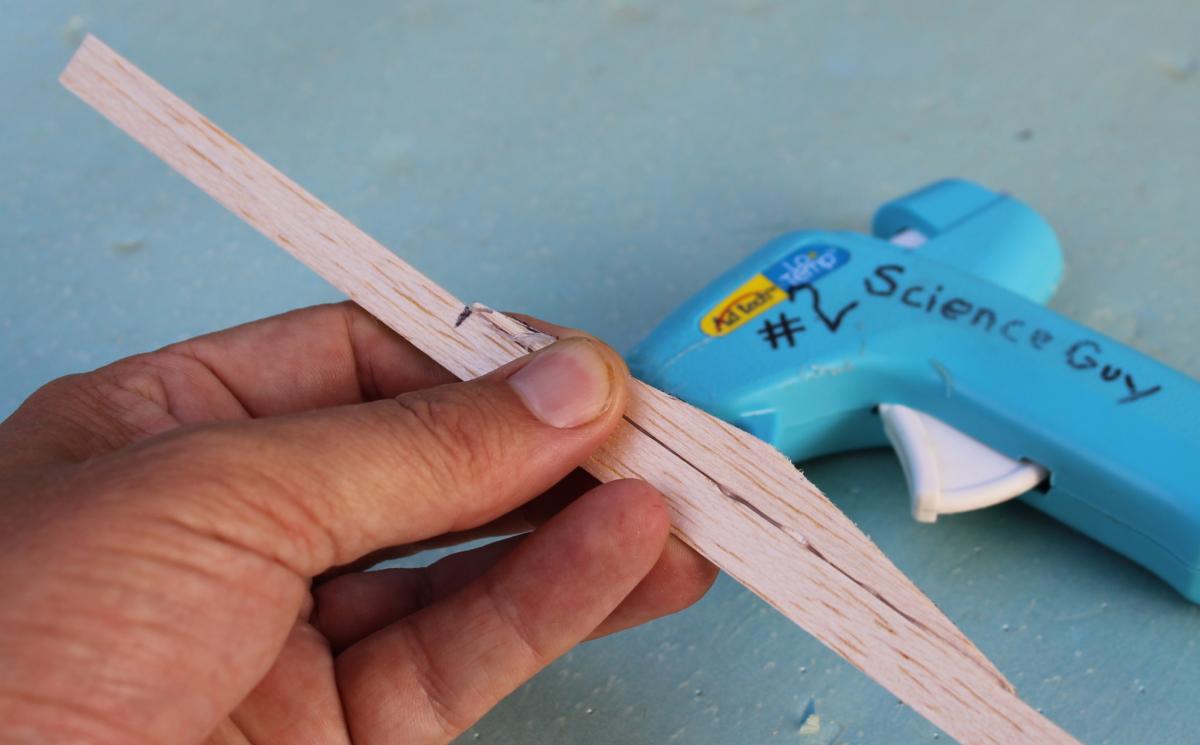 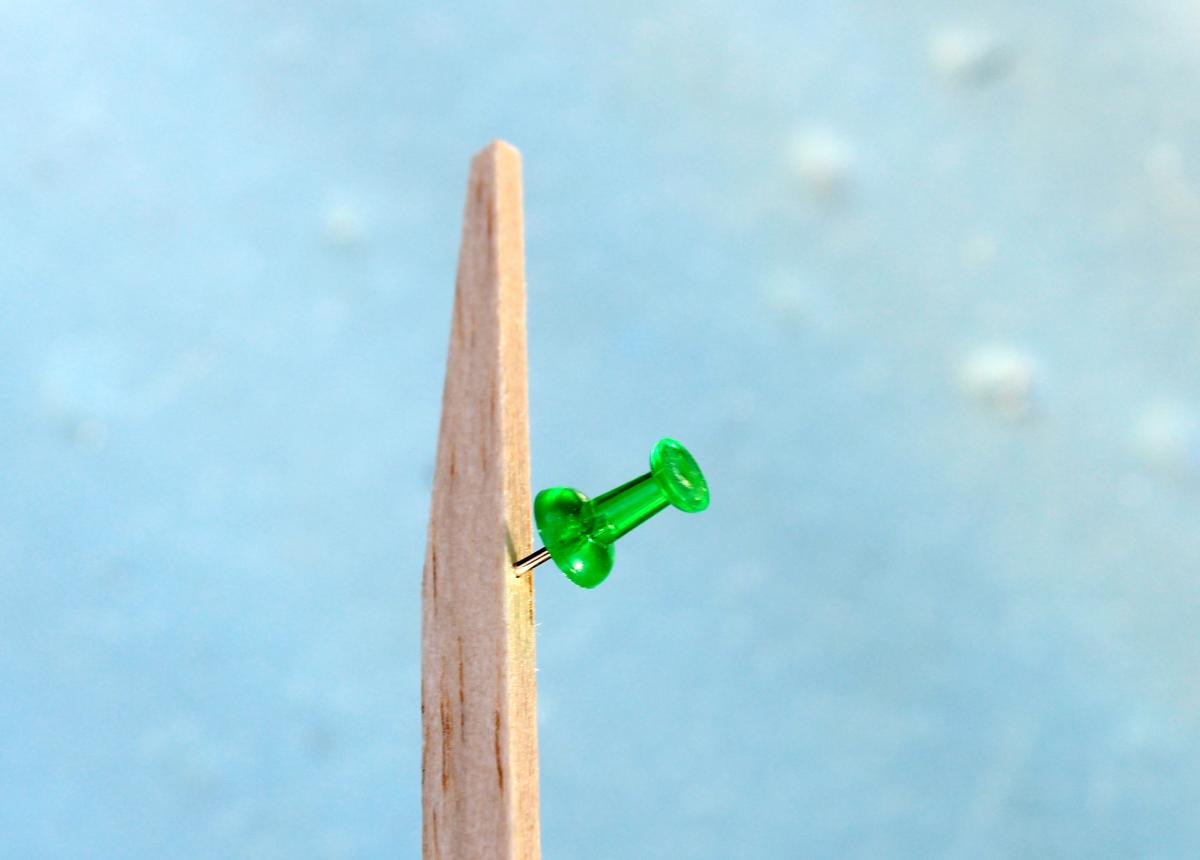 Create a hole for the rear hook to go into the fuselage bottom by using a push pin first. 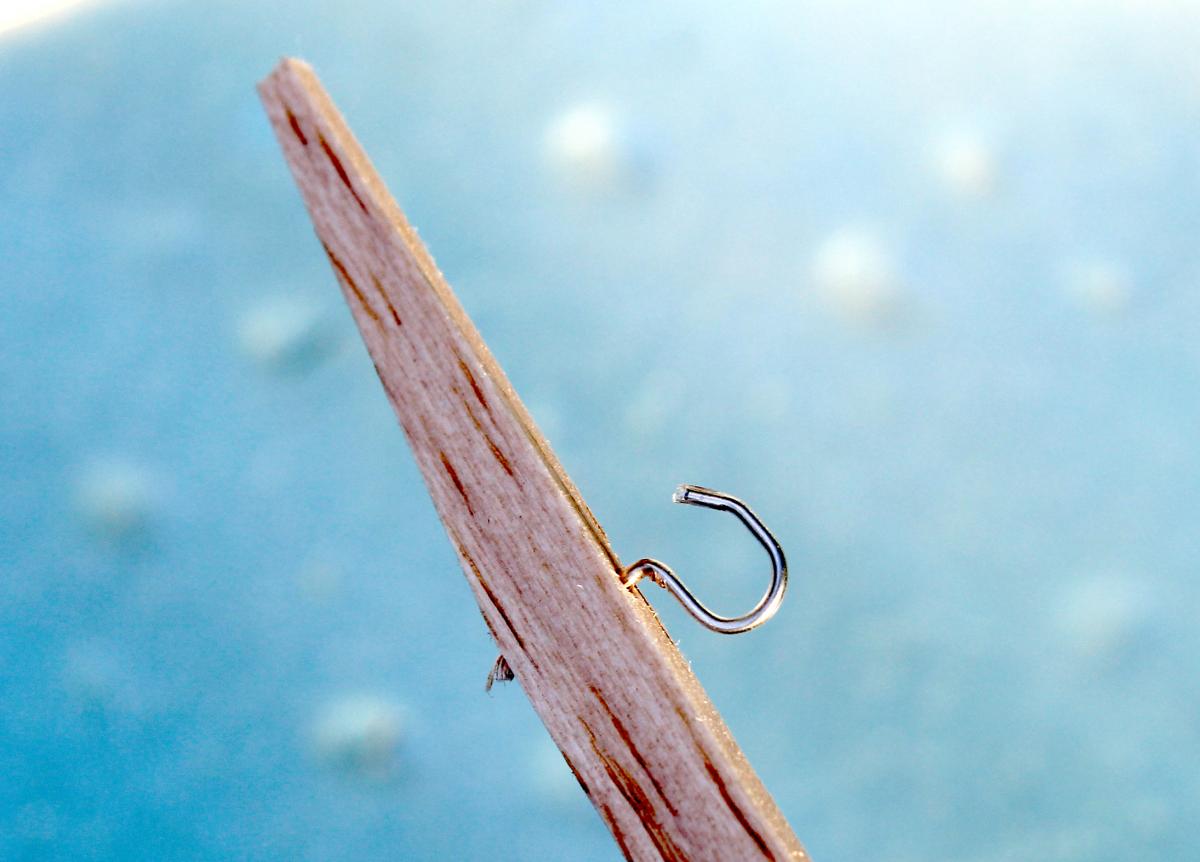 Try placing rear hook into balsa and remove. Now put glue in hole and in area where hook will rest on balsa. Insert the rear hook again. The rear hook needs to be pushed down farther than shown in this picture. Extra wire sticking out the top can be cut off.

Four 9″ foam plates are required to build the airplane, I cut out thin cardboard patterns and trace on to foam plates with ballpoint pen. Cut foam with a scissors. 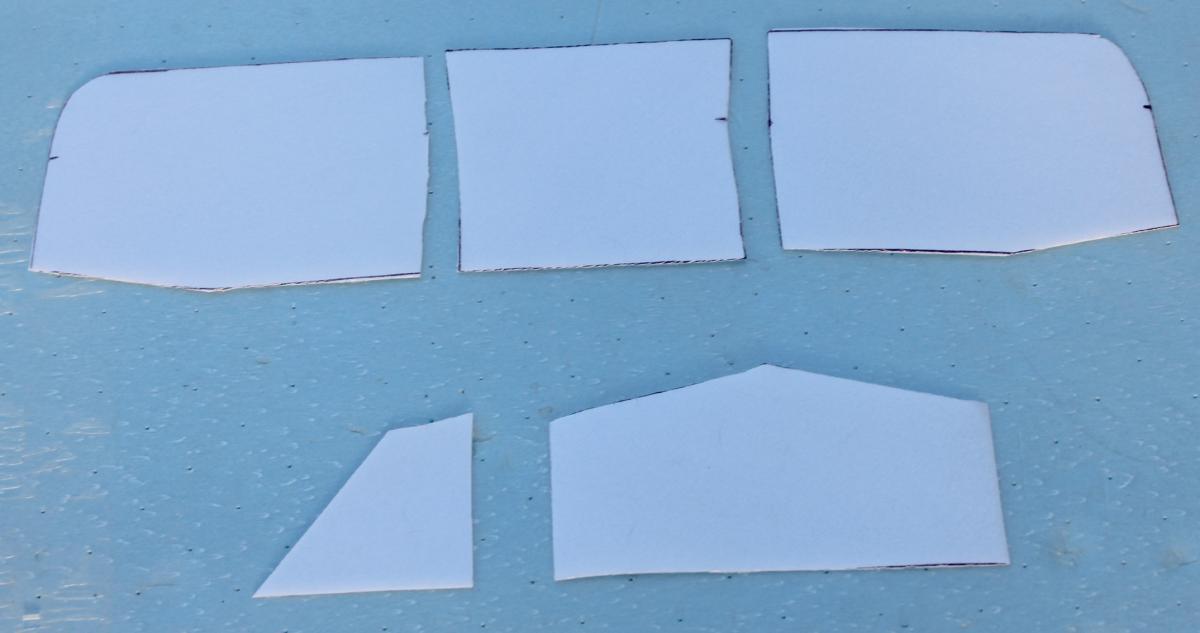 This is what the foam pieces should look like.

Bend all three wing panels at the same place with a straight edge. Ease the bend in slowly as the foam can crack if done too quickly. 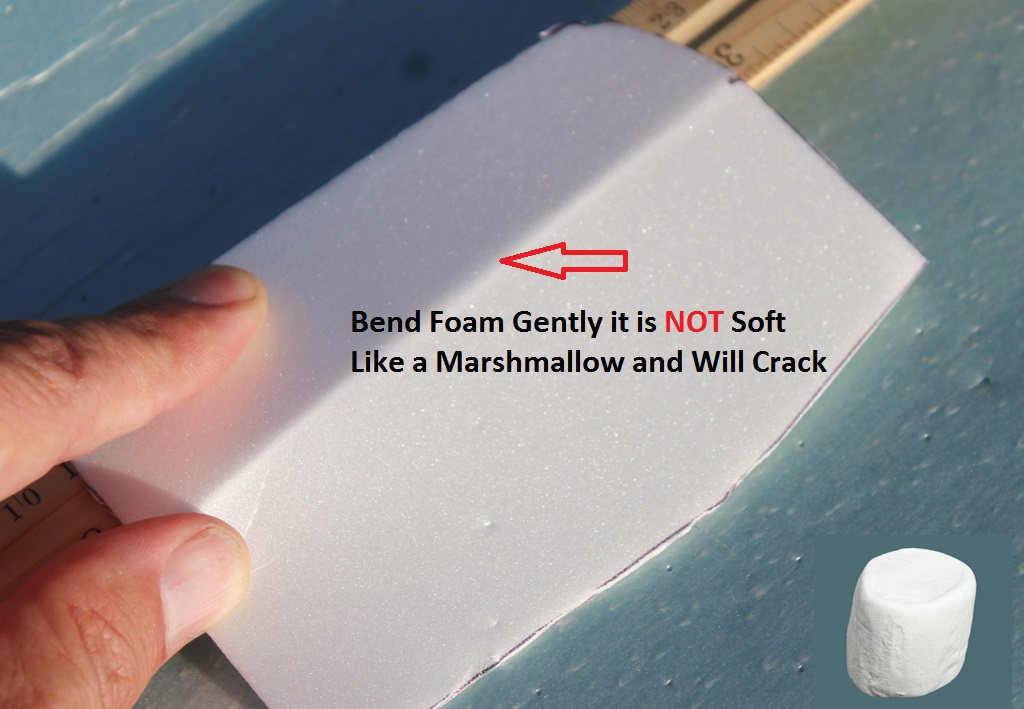 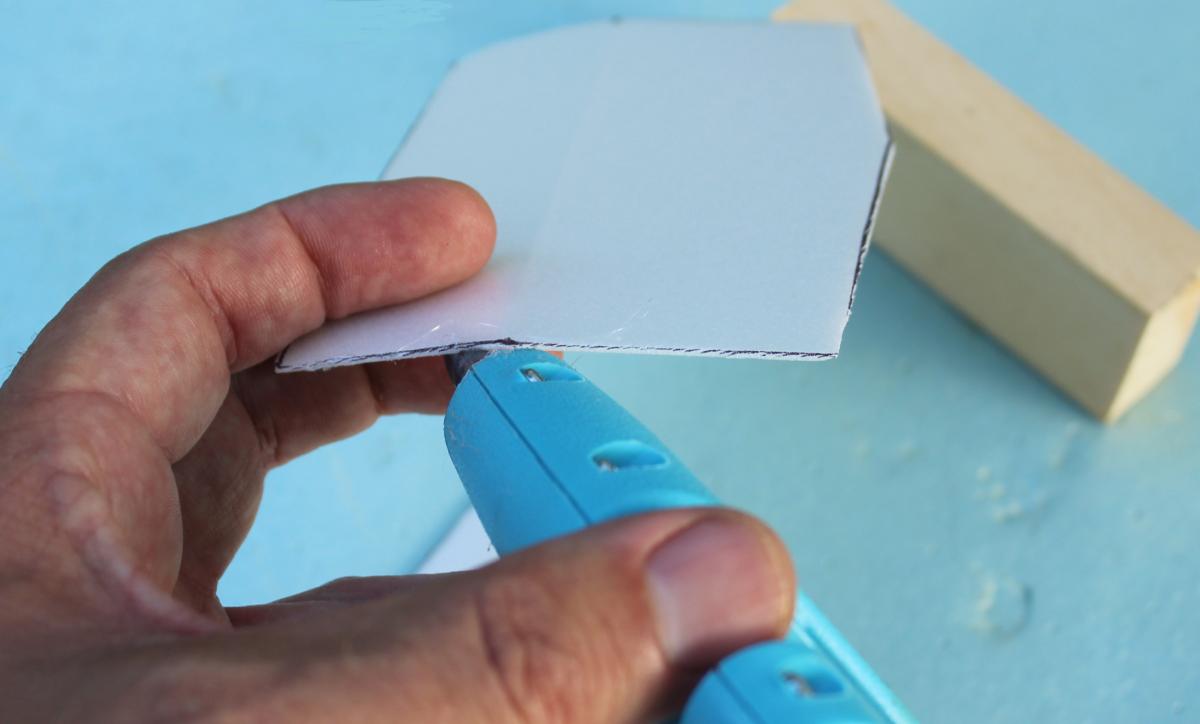 Glue the edges of the foam wing panels together and block in dihedral before glue hardens. 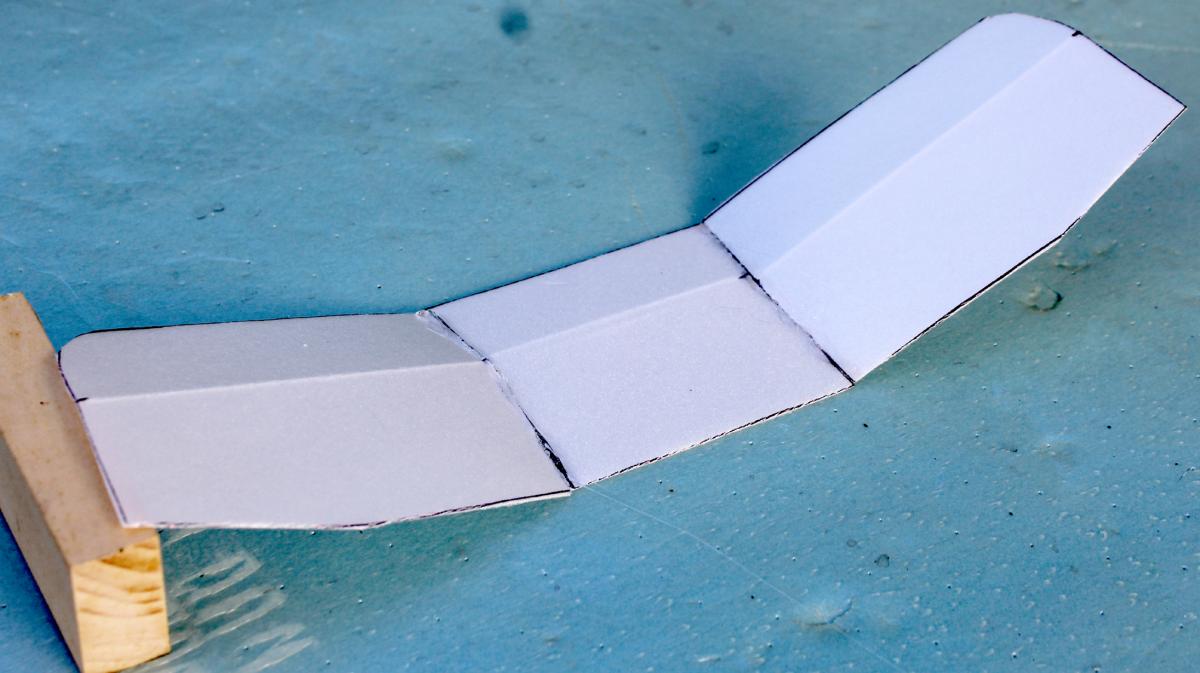 Panel blocked up to proper dihedral angle of 2 inches. 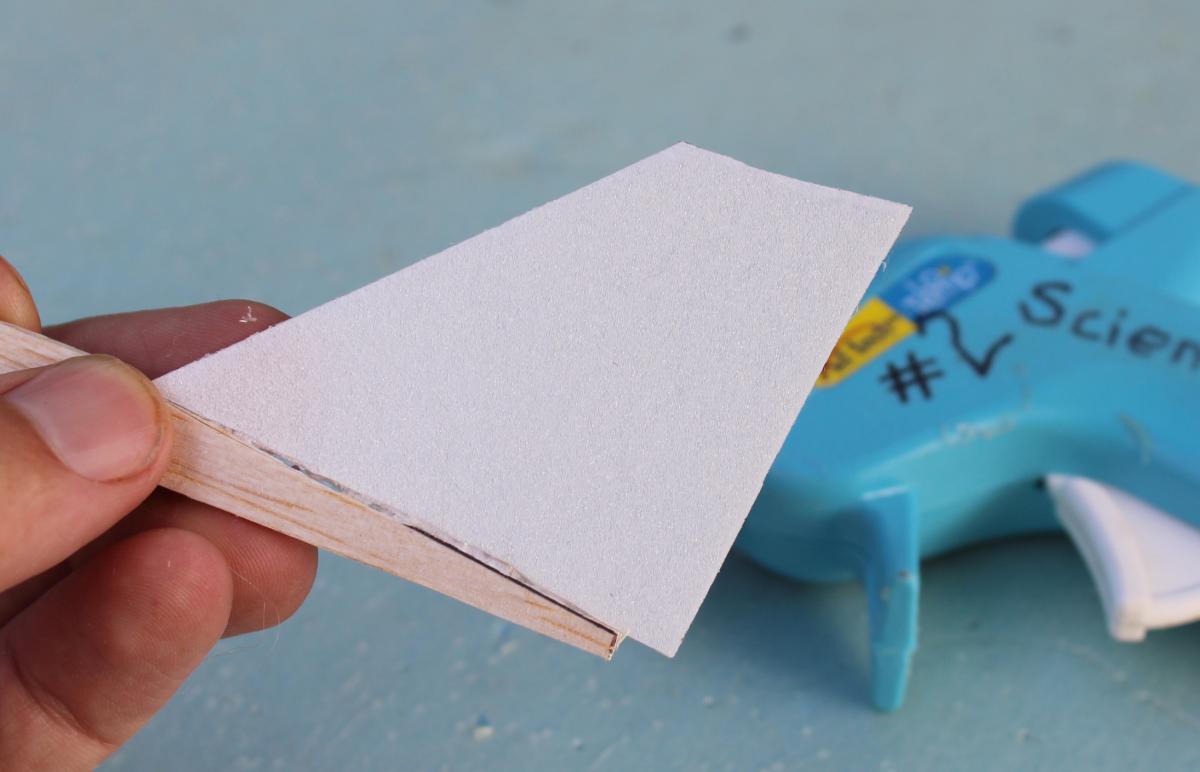 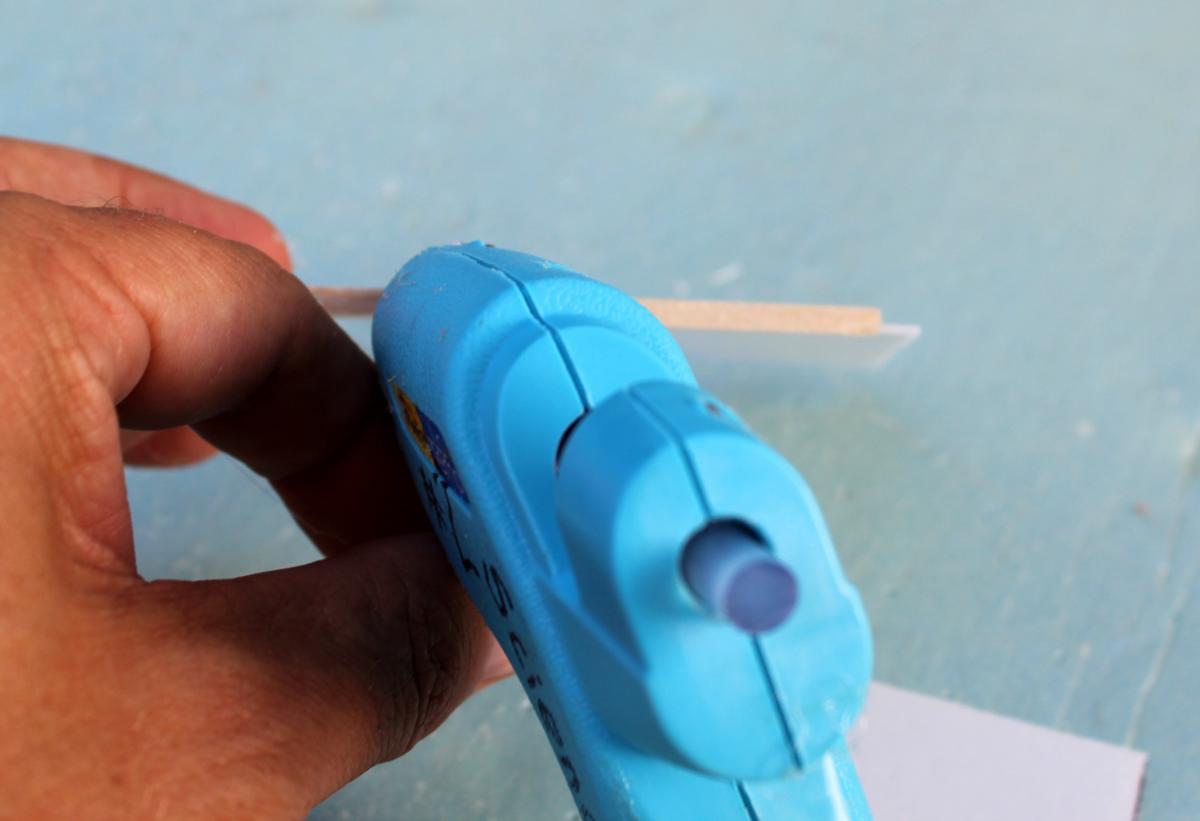 When this has setup, turn the fuselage over and glue the stabilizer on. 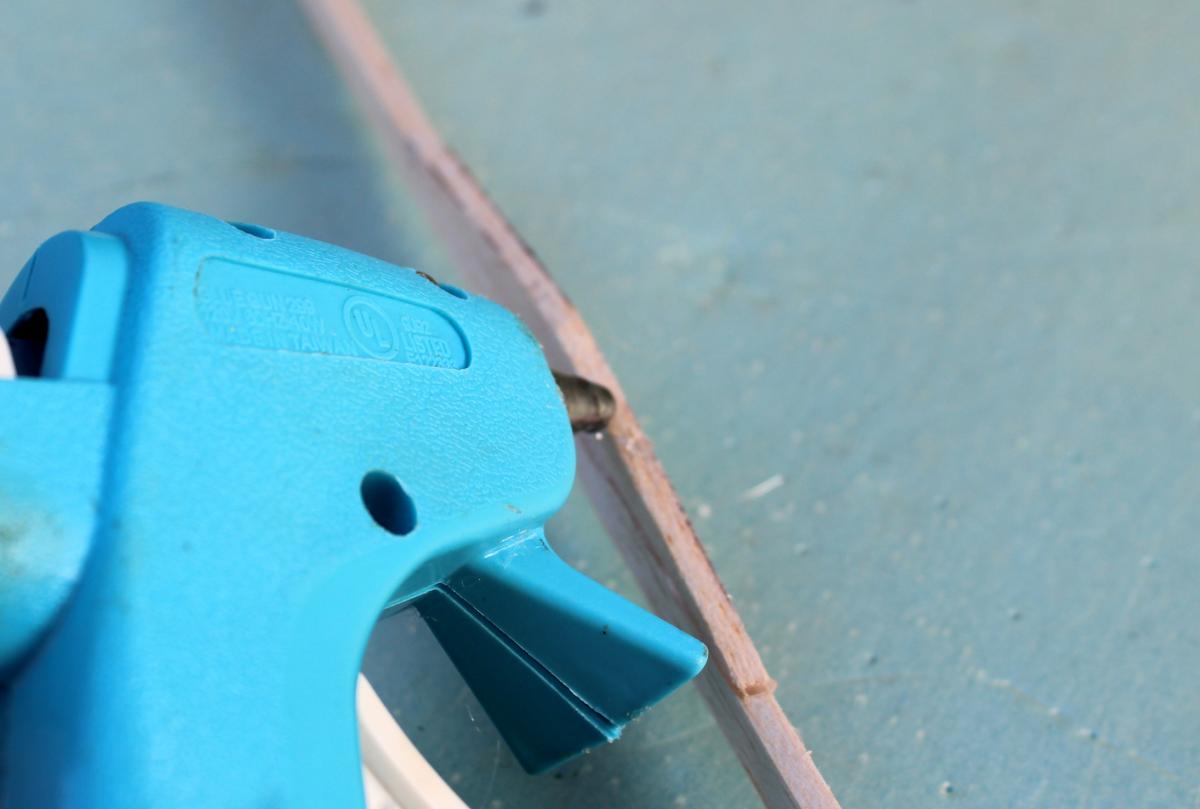 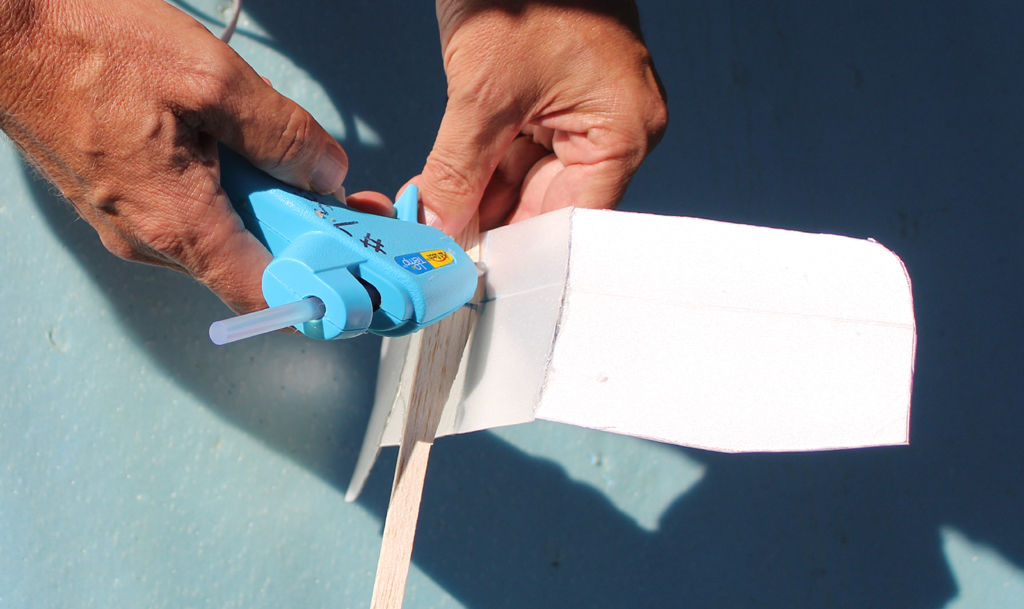 Glue the wing on the wing mount pylon, the bend in the bottom of the wing should match up with the high point of the wing pylon mount.

Note:  Watch steps for gluing foam surfaces in 20 seconds in this video. 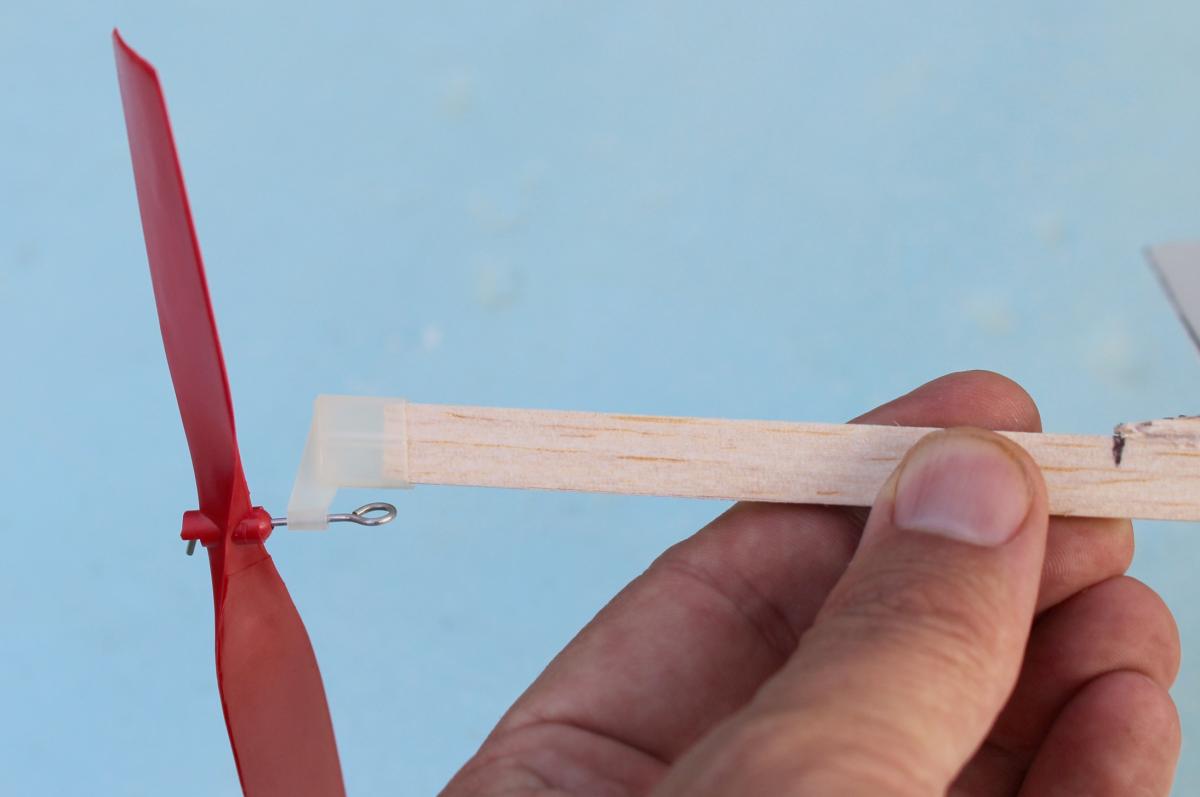 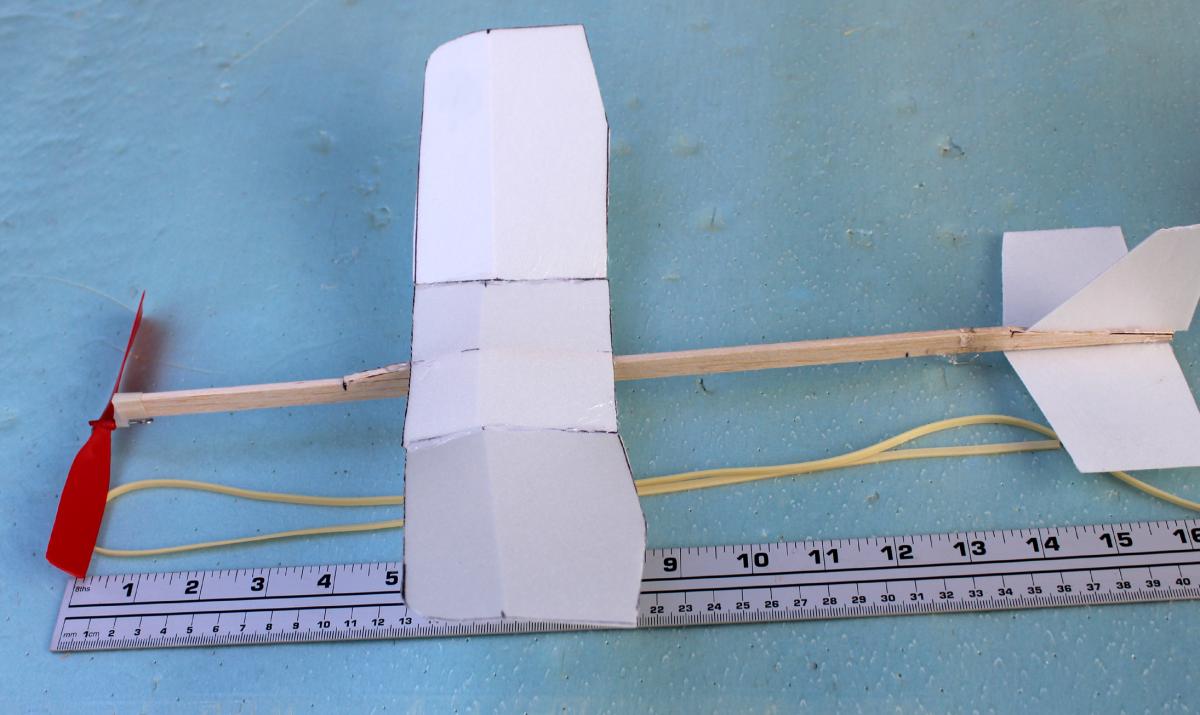 Rubber motors can easily be 1 1/2 times the length from the propeller shaft to rear hook but for hand winding I find it works best to make it that length with little extra.

I find that this plane flies well when balanced at the spot that the bend in the wing occurs. If the airplane will not climb, try cutting the front end of the fuselage by a small amount and trying again. If the propeller you are using is heavier this might be needed for proper balance.

Cut the rubber strip and tie a knot with the ends.

Attach the rubber with the knot in the rear hook. 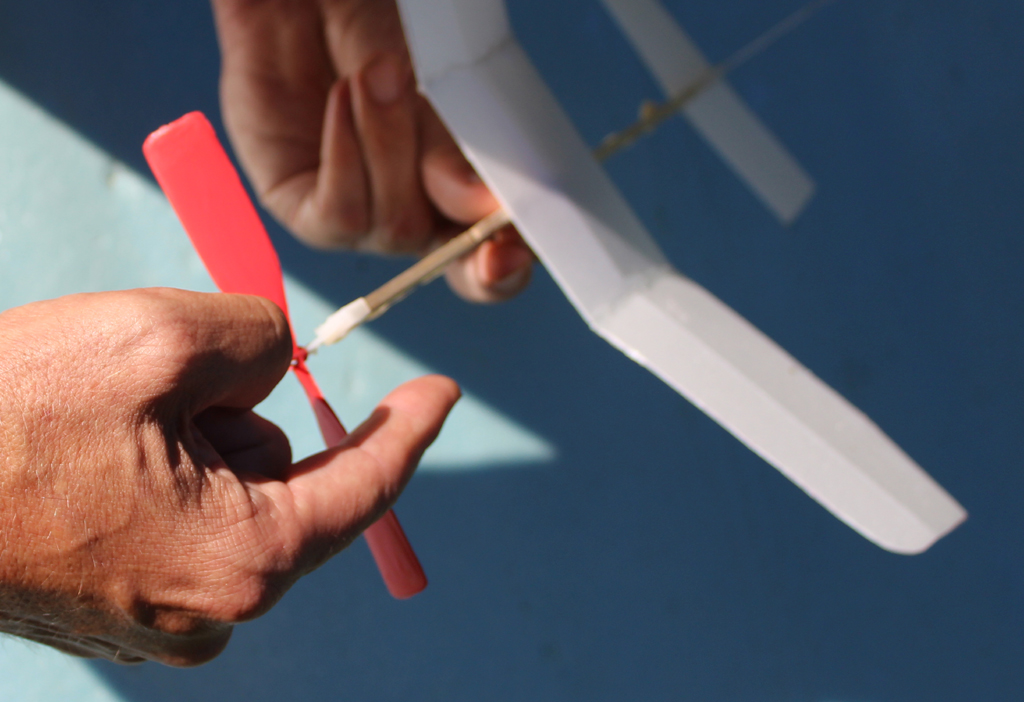 Spin the propeller clockwise to wind with your finger.

A rubber winder makes winding much easier and a greater number of turns can be wound into the rubber.

For more Information on the basics of trim adjustments and rubber motors check out my other webpages: