First, you should understand that only certain model aircraft are suitable for a beginning model pilot. We know that you really want to fly a P-51 Mustang fighter or F-16, F-15, Extra 300, Spitfire, B-17, Pitts Special (insert dream airplane of choice). But that is really, really not a good idea when you’re first learning. Scale models (model replicas of full size aircraft) like the Spitfire or highly aerobatic scale models like the Dave Patrick Extra 330L (shown below) make poor choices as trainers for several reasons:

While great for an experienced pilot, these types of models are best deferred to next season’s flying.

What about scale models of light aircraft? Shouldn’t they be good trainers? Not really. Even the venerable Piper Cub is not the best trainer. While it may takeoff, fly and land slowly it has other flight characteristics that limit its use as a basic trainer. First, it is too “short-coupled” meaning that the distance from the wing’s trailing edge to the front of the elevators is much too short when compared to the airplane’s wingspan. This makes the model airplane, as it does the full-size, less stable around the yaw axis. There is a lot of adverse yaw in a full-size or in a model cub. Being short-coupled also makes the elevator too sensitive for a basic trainer and the ailerons somewhat fast. 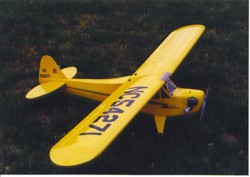 The cub is also difficult to handle during the ground roll part of the takeoff. No student pilot needs these hassles while trying to learn to fly RC. The cub is a great second aircraft however if you like scale airplanes (who doesn’t?), Most other scale kits of light aircraft have high wing loadings in addition to most of the Cub’s problems. Their takeoff and landing speeds are too high while their stall characteristics are too drastic.

Now that we have eliminated all the models you really wanted, what’s left? A tremendous amount is left actually. So we have to rule out most of them. Low-wing sport aircraft like the Goldberg Tiger II make great second airplanes. While possessing more gentle flying characteristics than scale or aerobatic models, these aircraft have fast control responses and less gentle stall characteristics.

Mid-wing sport aircraft like the Top Flite RC Nobler should be deferred until next year, as they are great third models. Control response is even faster than most low-wing airplanes, stall responses even worse, landing speeds higher and there are no self-righting abilities. Many of the newer “3-D” capable models also employ a mid-wing. While their stall characteristics are gentler than other mid-wing airplanes, their control response is even faster.

So what makes a good trainer?

Since an aircraft can only be a low-wing, mid-wing or high wing, guess which design is best as a basic trainer? Exactly right, the high-wing design. There are several reasons for this. A high-wing aircraft with generous dihedral, usually 3 in. or more over a six-foot wingspan, has the ability to regain straight, level flight even if the pilot places the aircraft in a 10-15 degree bank. RC pilots say the airplane is self-righting or self-leveling. This is often referred to as being “very stable”.

Without getting into great technical detail, this is a misnomer. Actually trainers are very unstable aircraft. Stability in an airframe means that the aircraft remains exactly where the pilot places it. RC Aerobatic Aircraft are among the most stable of all model airplanes. They stay exactly where they are aimed, even if left in a one-degree bank; they do not regain straight level flight on their own.

Good RC Basic Trainers do not stay put. They tend to regain wings-level flight if given half the chance. In addition, a Basic Trainer with a flat-bottom wing usually tries to regain level flight after elevator controls are released. Both characteristics make for a good Basic RC Trainer. But an airframe designer would say they have “roll and pitch instabilities.” This last part was mentioned just so you know the truth, but it is not really worth the effort to try to reinvent modeling terms that have been in use for sixty years. Follow the links below to read more about how to select the right kind of trainer aircraft.