How Do I Know the Difference Between Basic Trainers & Aerobatic Trainers?

A wing located on the top is not a guarantee that the aircraft is a good Basic Trainer. The Hobbico AviStar is a phenomenal Aerobatic Trainer and, like the Hangar 9 Arrow and Midwest Aerobat, provides the newer pilot with the easiest transition to a second airplane. While it is possible to become an RC pilot using any of these three fine aircraft, the learning curve is steeper and requires more flight time to achieve.

But these aircraft look so much like a basic trainer, such as the Midwest Aero Star, that you could be wondering what the differences would be. These four aircraft, and other basic trainers like the Hangar 9 Alpha 40 and the Hobbico NexSTAR, all have wings on the top and lots of dihedral. All of them look the same. So shouldn’t they all fly alike too? Not really.

The three aerobatic trainers have one major difference. Their wings possess a nearly symmetrical airfoil shape. The airfoil is the curving shape of the wing when viewed from the side. 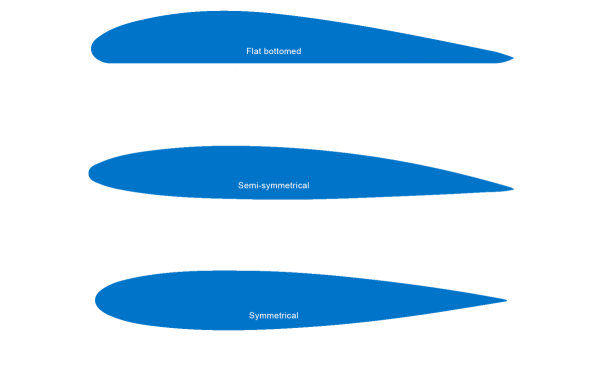 This makes all the difference in the world. To understand why, we need a very brief course on what makes an aircraft fly. Promise, it will be a very brief course. You may have learned in school that an airplane wing develops lift because air flows faster over the curved top of the wing than it does over the wing’s straight bottom. This happens because the air on the top must cover a greater distance in the same time frame than does the air on the bottom.

Good ole’ Uncle Bernoulli discovered that the faster a given amount of gas moves, the lower becomes its pressure. We call it Bernoulli’s Theorem. Since the air on the bottom of a flat-bottom wing is moving more slowly, it must have a greater pressure than the air on the top and tends to push the wing upwards against the lower top pressure. BAM! The wing develops lift. Great story. It is even somewhat true.

But most all full-size and model aircraft have wings that are nearly symmetrical (called semi-symmetrical) or truly symmetrical. The wing shapes are the same top and bottom. How then do these aircraft fly? Good question that. There is a good answer as well. These wings develop lift because they, like most things in the universe, must follow Newton’s Third Law of Motion.

You know this one. It is the one that says push on something and that something pushes back at you with the same force: Something about equal and opposite reactions. If you look at Fig.2, you will see how this works. A symmetrical airfoil must have a positive angle of attack to the oncoming air to fly. Because of Newton’s Third Law, the air deflected downwards pushes the wing upwards with equal force. Again, we have the wonder of lift and the airplane flies. The greater the attack angle, up to a point of about 17-20 degrees for most models, the more lift the wing produces.

A symmetrical airfoil like the Avistar’s develops lift using only Newton’s Third Law. But a flat-bottom wing like the NexSTAR’s obtains lift using both Newton’s Third Law and Bernoulli’s Theorem. Therefore, for a given wing area, a flat-bottom wing produces more lift at a given airspeed and angle of attack than would a symmetrical wing with the same conditions. This is why all basic trainers utilize a flat-bottom wing. Aerobatic trainers use more symmetrical wings because these airfoils develop the same amount of lift whether inverted or upright. This is good for aerobatic flight, but not usually required in a basic trainer.

The extra lift produced by these wings allows the basic RC trainer to takeoff, fly and land more slowly, Modern RC basic trainers are nearly impossible to accidentally stall because of the excess wing lift. The extra lift can often rescue a student pilot from bad situations such very slow airspeeds in steep bank angles at low altitude. An aerobatic aircraft, even most aerobatic trainers, will stall and snap roll in such situations. When stalled in a steeply banked turn, a basic trainer just kind of levels it wings shakes its fuselage straight and starts flying again.

Since it flies slowly with lots of excess lift, the basic trainer allows the student pilot time to think and react. This extra time is really appreciated during landing practice. The slow landing speed also limits nose gear damage during those first hard landings.

That brings up the subject of landing gear configuration. Almost all basic trainers use a nose wheel. Very few are “tail draggers.” The nose wheel provides easier ground steering and more stability during the takeoff ground roll than does a tail wheel. We will not discuss the Center of Gravity relationships to control vector application point details as to why. Rather than delve into that subject right now, you will want to just take our word for it.

So now we know the best basic trainer configuration has a high-wing with a flat-bottomed airfoil and uses a nose wheel on the ground. What about size?  A 3 versus 4-channel control system?