NASA is a grant partner in the permanent display of model aviation in the Children’s Museum of Indianapolis (the world’s largest), Flight Adventures unit of study, and Wings Over Indiana, a 60-minute PBS documentary television show on the role of models in aviation and aerospace. NASA will continue to pursue three major education goals:

To learn more about education at NASA, visit their website here.

Interested in working with NASA? Students can learn about internship opportunities here! 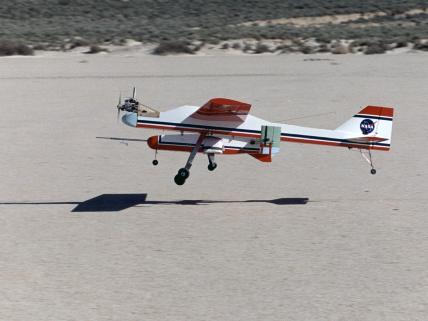 The AMA and The Children’s Museum of Indianapolis collaborated on a project called “Curious Scientific Investigators: Flight Adventures” that was funded by a grant from NASA. As part of this grant, the AMA’s National Model Aviation Museum will receive the IS2000 inflatable wing model airplane. The following article is a news release about the IS2000 that was published by NASA on July 9, 2001:

Recalling Hugh Dryden's vision for the purpose of flight research, Jeff Bauer, manager of Dryden's inflatable aircraft project, noted "With these tests we have put some reality behind the many imagined applications for inflatable winged aircraft."

Three successful flights of the I2000 inflatable wing aircraft occurred. During the flights, the team air-launched the radio-controlled (R/C) I2000 from an R/C utility airplane at an altitude of 800-1000 feet. As the I2000 separated from the carrier aircraft, its inflatable wings "popped-out," deploying rapidly from pressure provided by an onboard nitrogen bottle. The aircraft remained stable as it transitioned from wingless to winged flight. The unpowered I2000 glided down to a smooth landing under complete control.

As a result, flight data now verifies and validates computer models of inflatable wings for the future. The I2000 was equipped with a miniature flight data recorder designed by engineer Jim Murray. That data, in addition to video and the photographic record, provide valuable insights into the aircraft's flight dynamics.

Flight of the I2000 followed a conservative "build-up" approach common in developmental testing. The Dryden team began flying the I2000 with rigid wings having the same physical dimensions as the inflatable wings. Following successful flights with the conventional rigid wings, the actual inflatable wings were flown pre-inflated on the I2000. These risk reduction efforts were all geared to narrowing the possibility of trouble in launching and flying with the deployable wings. Tony Frackowiak of Dryden's model shop built all the glider models and R/C aircraft used in the project and served as the I2000 pilot.

"There were no surprises since I was well prepared for the actual wing deployment flights," says Frackowiak. "We flew the I2000 build-up style in the powered mode with the wings pre-inflated. The drop and wing deployment was so smooth that the rest of the flight and landing was uneventful," Frackowiak said. 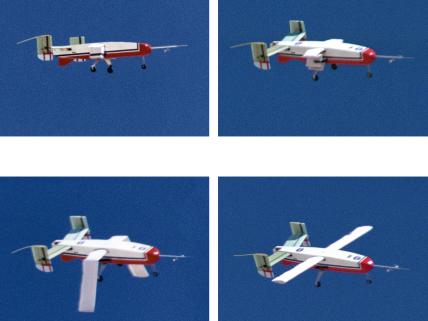 Each inflatable wing is 2.7 feet-long for a wingspan of just over five feet, not including the fuselage. In the undeployed stowed state, the wings fit in a container the size of a small coffee can.

Wing deployment time is typically on the order of a third of a second, almost faster than the human eye can see. The specially designed wings utilize compressed nitrogen gas for the near-instantaneous inflation. A pressure regulator mounted on the nitrogen pressure vessel keeps the internal pressure of the wings at a constant 200-250 pounds per square inch (psi), reducing the possibility of wing-sagging due to low internal pressure or high external pressure. The nitrogen tank was pressurized to 500 psi in order to allow excess gas to make up any pressure losses in the wings due to leakage.

Having completed the I2000 flights, the next goal of the project is to fly a four-foot long X-24A model with the inflatable wings by the end of summer in hopes of proving the concept of using deployable inflatable wings with lifting body vehicle configurations. The X-24A model effort is a complementary but separate effort in demonstrating the utility of inflatable wings.

The X-24A shape was chosen because it has a well-established aerodynamic database. It represents lifting body vehicles in general, and, in particular, has upper body flaps for additional roll control. The inflatable wings do not have flight controls, so the body flaps are critical for flight control. The I2000's tail surfaces filled the gap on that standard configuration airplane. The buildup to the inflatable wing X-24A flights will include flying the model with rigid wings first, the same procedure used for the I2000. Potential advantages of utilizing inflatable wings on future lifting body vehicles include providing greater range, maneuverability, and lower landing speeds than totally wingless vehicles.

The deployable inflatable wings were constructed by Vertigo, Inc., as a subcontractor for a U.S. Navy Phase II Small Business Innovation Research contract. The contract previously utilized the wings tested on a gun-launched munition to add glide capability to it.