There are many types of model airplanes. Some are built from wood kits—assembled one stick at a time—and then covered. Some consist of fiberglass fuselages and Styrofoam (foam) wing cores with balsa sheeting. Some are built straight from plans. In that process, the builder cuts the wood into all the pieces of a kit and then starts the assembly. Last, there are modelers who design their own aircraft, draw the plans, create the kit and then build it. In this article we will be discussing almost ready-to-fly (ARF) and ready-to-fly (RTF) aircraft.

We will cover the types of airframes available and which are best suited to learning the basics of remote control (RC) flight. The airframe is the housing for the engine and is what allows the plane to lift off of the ground. Along the way we will include some thoughts about how to modify ARF and RTF airframes to improve performance and durability. Proper balancing is important, as is building the airframe straight and true.

ARF and RTF appearances are usually predetermined, but there are some ways in which even beginning pilots can make minor changes to the looks to set their aircraft apart from all the others. Radio setup can be optimized on many models—even on some RTF airframes.

The sheer number of ARF and RTF aircraft is astounding. There are Scale models that replicate full-scale airplanes and competition models meant for aerobatic-performance contests. There are basic trainers, biplanes, second aircraft, sport models, 3-D performers and some that defy any logical description.

All of those accomplish their design tasks far better than their compatriots of just 20 years ago. But new RC pilots will usually find it best to begin with a "basic trainer"-type aircraft.

Why begin with a good basic trainer design? It is possible to learn RC piloting on any type of model, but sport or Scale aircraft react quickly to control inputs, leaving less time for the new pilot to plan the next control inputs. Also, takeoff, in-flight and landing speeds can be higher with the more reactive models.

Sport and Scale airplanes demand more from the pilot than most basic trainers. In addition, their higher airspeeds and quicker control responses mean that this "more from the pilot" must happen more quickly. This requirement that the pilot be "further ahead of the airplane" makes learning to fly RC with a sport airplane more difficult and time consuming. An example of a sport airplane is shown below. The particular model that is shown is the Sig-Four Star 60. 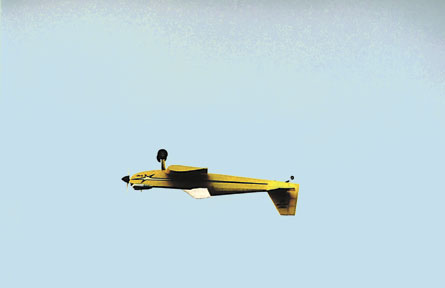 There are so many excellent sport ARF designs that make great advanced trainers or second models that many new pilots want to use them as their basic trainers. This is possible, but sport aircraft have certain drawbacks in that capacity.

Although high-wing advanced trainers, such as the Midwest Aerobat, which is shown below, may resemble basic trainers and even have similar wing loadings (the weight each square foot of wing area must support), their design criteria are different, as are their wings' airfoils. 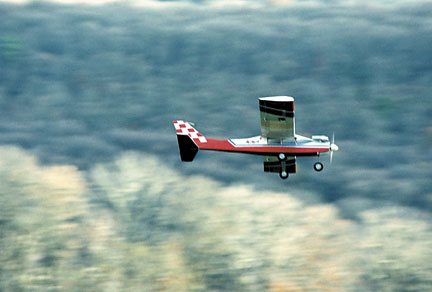 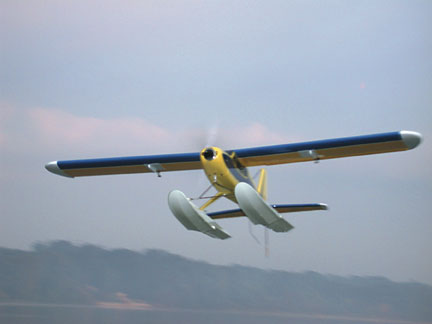 The symmetrical airfoil, as shown below, actually has slightly less air drag than an equivalent flat-bottom wing. This means that the aircraft gains more airspeed than a basic trainer if the student pilot lets the nose drop in a turn. Aerobatic trainers will not "balloon" as much (raise the nose and climb) in this situation as basic trainers would. That is a plus for them. 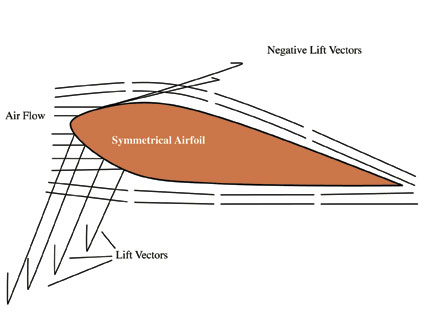 However, the increasingly rapid descent in the turn usually causes the new pilot to input substantial up-elevator, causing the aircraft to rocket upward or tighten the radius of the turn. Learning to make level turns is the first step in becoming an RC pilot, and aerobatic trainers make that more difficult.

These second airplanes are designed to take a newly soloed pilot beyond basic flight and into the exciting world of aerobatic flying—not to be the best basic trainer.

Some Scale aircraft would seem to be ideal basic trainers and do use flat-bottom airfoils, but they are better suited as second models. The Piper Cub, as shown below, for instance, is extremely short coupled; the tail is close to the wing, given its wing's large span and width (wing chord). Without perfectly set aileron differential, one aileron moves upward much farther than the other moves downward and the Cub needs coordinated rudder/aileron input to make proper turns. Coordinated turns and aileron differential can be daunting for most new RC pilots and is seldom necessary in a basic trainer. 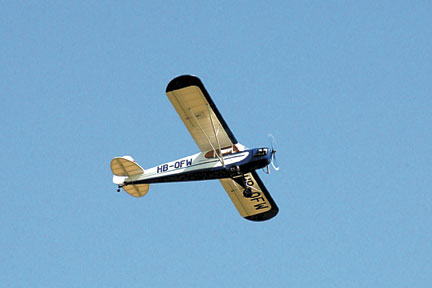 The Cub's short fuselage and narrow landing gear make ground handling troublesome for new pilots. Its light wing loading and large wingspan compound landing difficulties because the aircraft tends to land on the main gear and keep the tail up. This usually means that the wing drops to one side, pulling the aircraft off in that direction, or the model ends up on its back.

Yes, a new pilot can begin on a Cub or similar Scale model, but learning is easier on a basic trainer that is designed expressly for teaching RC piloting.

A good basic trainer has several design features to ease this learning process. Most important is that the wing usually has a flat bottom and a curved (airfoil-shaped) top section.

Only one basic trainer—Hobbico's Hobbistar 60—uses a semi-symmetrical airfoil, and its wing is made overly large to compensate. This type of wing produces more lift than a similar symmetrical wing with equal airfoil shapes on both sides.

The air flowing over the curved top section of a flat-bottom wing must move faster to cover the longer, curved distance than the air flowing over the straight bottom. According to Daniel Bernoulli's theorem of gaseous density, the faster a given amount of gas moves, the less dense it must become if all other conditions remain the same.

If the air above the wing has reduced density, the pressure it exerts on the wing's top is lower. This means that there is a "low-pressure" area above the wing. The wing tends to move upward into the low-pressure area, taking the rest of the aircraft with it. This relationship is demonstrated in the image below. 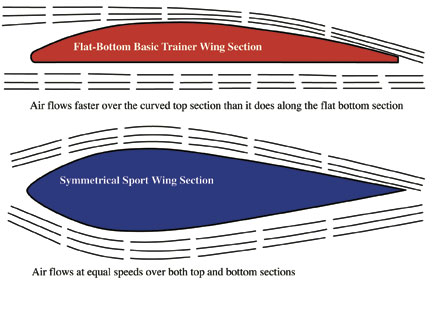 But then how does an aircraft with a fully symmetrical wing fly? Daniel Bernoulli is on vacation where this wing is concerned, but, fortunately for all sport and Aerobatics pilots, Sir Isaac Newton remains in the house.

If the wing is pointed upward to the airflow even a few degrees—called a positive angle of attack—much of the air striking the wing's leading edge (LE) is redirected downward. But Sir Newton demands that for every action (here the redirection downward) there is an equal and opposite reaction. Therefore, the wing is "pushed" upward, creating lift.

This is all a gross oversimplification of why an aircraft flies. There is still much debate about this subject even after 102 years. However, this basic explanation serves to illustrate why a flat-bottom wing has more lift per square foot than a symmetrical airfoil.

Of course, Newton's law also affects the flat-bottom airfoil—maybe even to a greater degree than it does a fully symmetrical wing. But Bernoulli and Newton work together on a flat-bottom wing, generating that extra lift.

It helps if the wing is placed on top of the fuselage (a high-wing configuration) and has some positive dihedral; the wing is bent in the middle so that the wingtips are higher than the center-section. The fuselage below the high wing imparts a slight pendulum effect, but every bit counts in a good trainer. The dihedral reinforces this pendulum effect.

Combining these two features helps to create an aircraft that will tend to stay in wings-level flight during straight flight and loops. They also help the pilot recover the aircraft from most turns. Fewer pilot corrections are therefore required in all of these flight regimes.

Dihedral has other effects, but some are not so beneficial. It allows the rudder to be used to bank and turn the aircraft better, but too much results in a model that requires continuous aileron input to remain in a banked attitude. This is troublesome because it teaches bad habits to a new RC pilot. On the other hand, a reasonable amount of dihedral, such as the three inches on Hangar 9's Alpha 60 RTF, which is shown, adds a great deal to a trainer's teaching abilities. 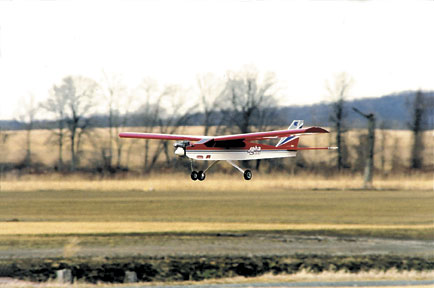 Power-plant selection is also important when studying a basic trainer. As far as we know, all RTF basic trainers that are powered by engines are two-stroke designs; these include Hobbico's NexSTAR, which is shown below. This RTF basic trainer features high-lift wing devices, flaps to control airspeed, and three-axis flight-stabilizing system. It also comes with a PC-based flight simulator and keeps flying even at 6 miles per hour (mph). If the pilot prefers to use a four-stroke engine, he or she must select an ARF. 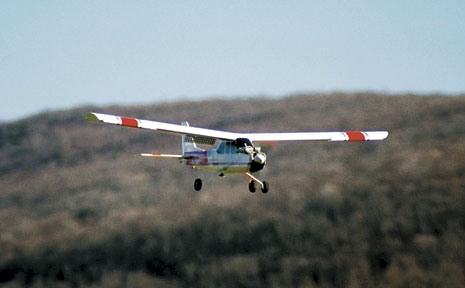 There are also a few electric-powered basic trainers. Some, such as Hobbico's SuperStar EP Select, which is shown below, are complete, four-channel RTFs. The SuperStar EP performs like a glow-powered aircraft and has that flight times that can reach seven minutes. Others, such as Horizon Hobby's HobbyZone Firebird Commander, also shown below, are basic, two-channel RTFs. 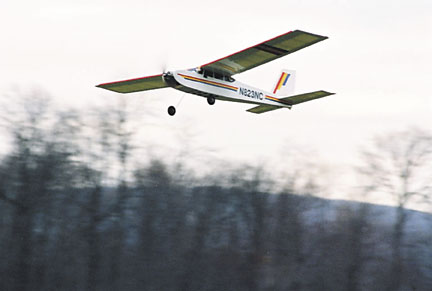 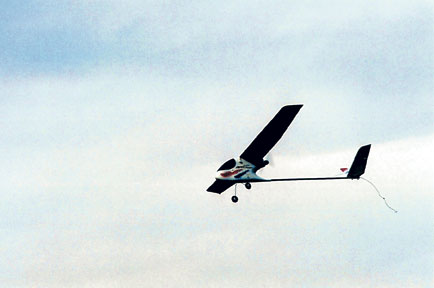 Engine-powered ARF basic trainers, such as Midwest's Aero-Star 40 and Lanier's Explorer 40, which are both shown below, offer the new RC pilot choices of radio system and engines that are unavailable in RTF models. However, this luxury comes at the cost of additional assembly work that could require basic model-building skills. RTFs require only that the new pilot be vaguely familiar with which end of the screwdriver points toward the work. 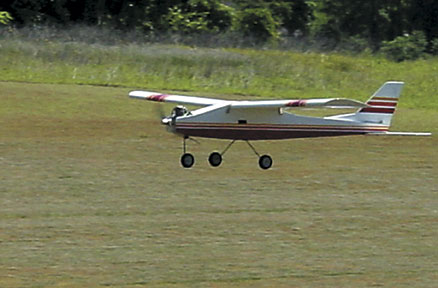 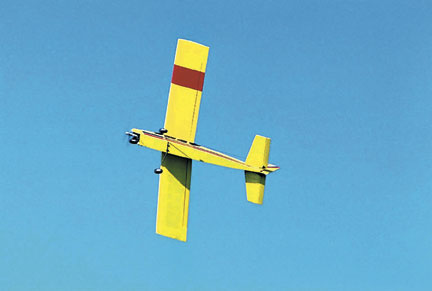 The amount and type of assembly work involved in ARFs and RTFs (it's hard to call preparing those models for flight "building") is all that separates the two. As you can see in many of the photos above, they look almost identical. And the two types do fly the same since there are few airframe-performance differences. There are performance differences, however, if the pilot equips an ARF with more powerful engines/motors and more capable radio systems than are usually found in an RTF.

With the exceptions of the Hobbico NexSTAR powered by the O.S. Max .46 Fxi engine, the HobbiStar 60 Mk III using the O.S. Max .60 LA engine, and the Hangar 9 Alpha 60 equipped with the Evolution .61 engine, all RTF glow-powered aircraft currently use .40 cu. in. power plants. No matter how good a .40 might be, and all of today's engines are good, a hot .46 offers more performance.

Except for the Hangar 9 Extra Easy 2 with the five-channel JR XF-421 computer radio system, all RTF basic trainers use analog four-channel radio systems for control. The NexSTAR does have an installed flight-stabilization system, which is similar to an autopilot but without direction control, but its transmitter remains a good four-channel analog system.

Whether a pilot chooses an RTF or an ARF airframe as a basic trainer is his or her choice. Both offer excellent aircraft and performance.