By Bill Kuhl
Click here to view the original article.
Check out his website for a lot of great science activities! 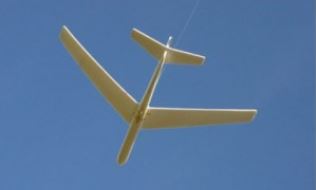 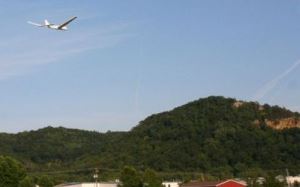 If you are like me, every time you see one of those big foam gliders in a toy store or hobby shop, you start thinking, how can I modify it to fly better or serve another purpose. I think the first one I purchased was converted to be a radio controlled slope soaring glider, not the most successful conversion because of strength issues. Someplace I had seen one converted to electric free flight. Gary Hinze had written an article about using the glider as a kite. I decided I would try to convert the big foam glider to operate as a free flight towline glider.

Towline free flight gliders are towed to altitude by a person running pulling a line attached to the tow hook the glider. Some of these gliders have rather sophisticated towing mechanism that can turn the rudder and start the dethermalizer timer on release. The gliders are normally super sleek with tiny fuselages and long skinny wings. 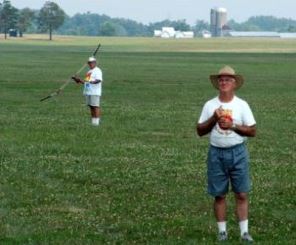 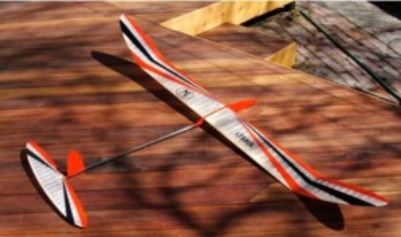 To start testing the concept of the towline glider conversion, I really started with the least amount of effort; I bent up a paperclip and fastened it to the bottom of the fuselage with masking tape. There was no one to launch, so I placed it on top of my mini-van, attached the kite string, and proceeded to run. It is much better to have a helper to launch but I did manage to get in a few successful launches. The wings didn’t break, as I had feared, and it had a slow, stable glide.

After a few launches, the paper clip ripped from the masking tape, so I decided to go to the effort  of hot gluing to a popsicle stick and then taping to the fuselage. The position of the tow hook that I have been using is about three inches ahead of the back of the wing, not sure this is ideal yet, will continue to experiment with positions. 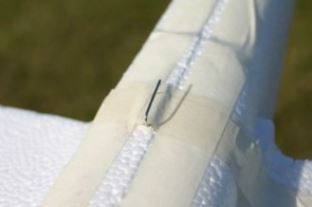 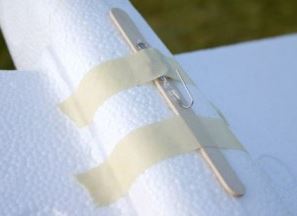 The other issue was the glider was flying too straight, so I decided to make a rudder trim tab cut from a pop can. Using a knife I cut a slot in the vertical fin and glued the aluminum pop can material in half way, flattening the material first. The trim tab can be easily bent to give the desired turn circle. 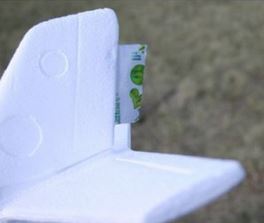 I wanted to be able to launch the glider without a helper for those times when I had to fly alone, so I came up with a “two-dowel” launching system. The ends of the dowels are sharpened to a point and then pushed into the ground at an angle. When the glider is pulled, it will slide up the dowels and launch successfully most of the time. For my next flying session I will try 1/4″ dowels instead of 3/16″ because the smaller dowels bend too much. Note: 1/4″ dowels did work well. 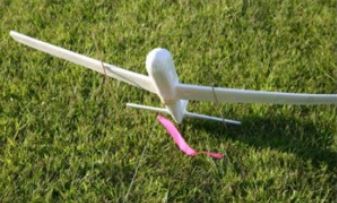 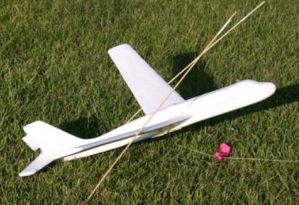 My experience with towline gliders is rather limited but I will share what I have learned so far. After installing the tow hook and rudder trim tab, give the glider some gentle hand glides. Do not throw hard! If the glider is stalling (going up and down), you might need to add a small amount of nose weight, my glider did not need the weight. For the first tow launches I would start with around 50 feet of string. Just as you start to pull the string, your helper should release the glider at an angle of around 45 degrees. The glider should start to climb immediately, if it is gliding flat; it needs to be launched a little steeper or you need to run a little faster. If the glider starts to turn too much from straight, stop pulling immediately and left the line release. Pulling too hard on the line would probably break the wing which hasn’t happened for me yet.

This is a quick project that lends itself to lots of experimentation. Another idea I had was putting some rubber strip, maybe 1/8″ wide in front of the towline, stake it down, pull back, and launch like the hi-start launch used with radio controlled sailplanes.

Video of this glider flying can be seen in my YouTube video, “Fun with Foam Gliders“.

To place the tow hook in the proper position, find the balance point of the model by hanging it from a string attached to a pin that can be stuck into the foam somewhere on the wing chord. Then try different positions, moving the string and pin until the model hangs horizontally. Put the tow hook about 1/2″ in front of the balance point on the bottom of the fuselage.

If you fly with a fixed rudder for turn instead of using an auto rudder, mount the tow hook on the side of the fuselage toward which the model turns. The yaw induced under tow with the offset tow hook will make the glider tow straight up the line (if the hook is properly positioned fore and aft).

If the model wants to veer to one side, the person towing should run to put himself back in front of the nose rather than trying to change the glider’s direction by running in the opposite direction to the veer.

Use a ring from a key ring at the end of the towline. A small 6″x6″ flag from light cloth attached to the line near the ring will give enough drag to cause the towline to fall off the hook at the apex of the tow.

For gliding, the tow point may be set at maximum L/D when the CG is set for minimum sink, about the same. The tow point must be ahead of the CG.